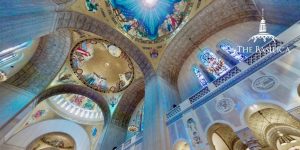 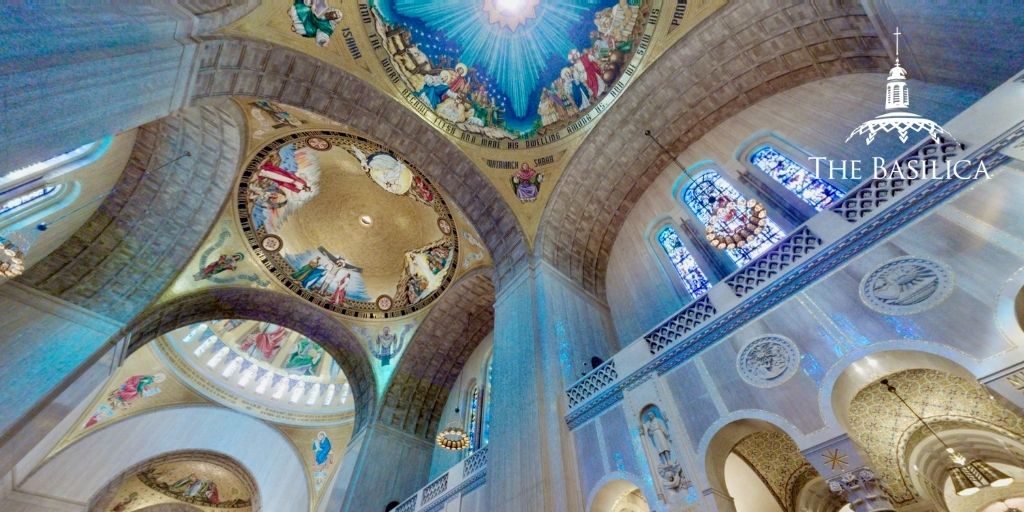 The Bible is full of faithful women who glorified the Lord through their lives, and as we navigate life’s challenges today, we can be inspired by their example. In honor of International Women’s Day, we’re highlighting the stories of some of the great women of the Bible and where you can find them in the Basilica. Explore how the Basilica honors these women in stunning 360° views with our immersive virtual tour experience.

Sarah and Abraham had long tried to have a child of their own and had all but given up hope. As a last resort, Sarah gave her maidservant Hagar to Abraham, that she could have a child for them. After the child’s birth, the relationship between Sarah and Hagar became strained. Though Abraham and Sarah despaired of having children of their own, God had a plan for them. He promised to give them a son in their old age.

As for Sarai your wife, do not call her Sarai; her name will be Sarah. I will bless her, and I will give you a son by her. Her also will I bless; she will give rise to nations, and rulers of peoples will issue from her.

[Y]our wife Sarah is to bear you a son, and you shall call him Isaac. It is with him that I will maintain my covenant as an everlasting covenant and with his descendants after him. — Genesis 17:15-16, 19

When Sarah heard, she laughed — what could be more incredible than a nonagenarian giving birth, after all? But God blessed her with a son, whom she named Isaac, which means “laughter.” Because of her faithfulness, she had a legacy that continued throughout generations — we see her mentioned later in Isaiah 51:2, as well as Romans 9:9, Hebrews 11:11, and 1 Peter 3:6. She is called “a holy woman” and commended for her faith along with her husband.

Sarah can be found in the northeast pendentive of the Incarnation Dome:

Hannah also struggled with infertility; she was further plagued by her husband’s other wife, Peninnah, who would taunt her. Her husband loved her greatly, but her sadness was overwhelming:

Year after year, when she went up to the house of the Lord, Peninnah would provoke her, and Hannah would weep and refuse to eat. Elkanah, her husband, would say to her: “Hannah, why are you weeping? Why are you not eating? Why are you so miserable? Am I not better for you than ten sons?” — 1 Samuel 1:7-8

In her misery, she pleaded to the Lord to give her a son, promising that she would give him back to the Lord for his service. Within the year, she gave birth to her son Samuel, and when he was weaned, she brought him to the temple, where he would serve under the priest Eli. Though it must have been difficult, Hannah did it with joy, praising the Lord for His blessing (with a prayer that is reminiscent of the Magnificat that Mary would later pray):

“My heart exults in the Lord,
my horn is exalted by my God.
I have swallowed up my enemies;
I rejoice in your victory.
There is no Holy One like the Lord;
there is no Rock like our God.
The Lord puts to death and gives life,
casts down to Sheol and brings up again.

The Lord makes poor and makes rich,
humbles, and also exalts.
He raises the needy from the dust;
from the ash heap lifts up the poor,
To seat them with nobles
and make a glorious throne their heritage.

Hannah is portrayed in the Presentation Chapel of the Great Upper Church:

Elizabeth was also barren until late in her life, but God had not forgotten her. The Bible describes her as righteous and upright before God, and she was ashamed that she had not had any children. In fact, when she discovered that she was pregnant, she responded that the Lord “had seen fit to take away my disgrace.” This is a contrast to her husband, who was struck mute when he responded in disbelief to the angel that brought him the news.

Elizabeth was also related to Mary, whose pregnancy story intersects with her own. It was upon Mary’s visit that Elizabeth called Mary blessed, and Mary responded with what we now know as the Magnificat.

A few months later, Elizabeth gave birth to a son, and when they brought him to be circumcised at eight days old, her neighbors and relatives tried to convince her to name him after his father. Elizabeth responded that he would be called John, even though none of their relatives had the name. They asked Zechariah what they wished for the child to be called, and he wrote on a tablet that he should, in fact, be called John. Instantly he recovered his ability to speak and praised God. All of their neighbors were amazed and said that the child must be destined for great things, because the hand of the Lord was upon him.

Discover the St. Elizabeth Chapel in the Crypt Church:

The most well-known woman in the Bible, Mary conceived Jesus, the Son of God, through the Holy Spirit. She was visited by the angel Gabriel, who informed her of the unique privilege that she had of bearing God’s Son. She responded in humility, rejoicing in the Lord’s greatness, and He blessed her greatly for her faithfulness.

We see her faithfulness displayed in the Magnificat, her proclamation of God’s goodness:

“My soul proclaims the greatness of the Lord;
my spirit rejoices in God my savior.
For he has looked upon his handmaid’s lowliness;
behold, from now on will all ages call me blessed.
The Mighty One has done great things for me,
and holy is his name.
His mercy is from age to age
to those who fear him.
He has shown might with his arm,
dispersed the arrogant of mind and heart.
He has thrown down the rulers from their thrones
but lifted up the lowly.
The hungry he has filled with good things;
the rich he has sent away empty.
He has helped Israel his servant,
remembering his mercy,
according to his promise to our fathers,
to Abraham and to his descendants forever.” — Luke 1:46-55

She remained strong during the difficult period of Jesus’ early life, trusting in God though everyone believed that she was pregnant with an illegitimate child.  She did not doubt as she traveled to Bethlehem with Joseph and gave birth in a stable, or when she and Joseph were forced to flee to Egypt as King Herod sought to have Jesus killed. As Gabriel stated, the Lord was truly with her and showed favor to her, giving her strength and honor as the mother of Jesus.

Mary is honored throughout the Basilica, but the Immaculate Heart of Mary Chapel specifically focuses Mary’s love of God: