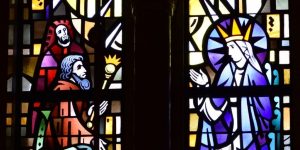 This post is the fourth installment in the Basilica’s Biblical Figures series, which highlights the stories of the individuals throughout the Scriptures who are portrayed in “America’s Catholic Church.” While some of them inspire us with their unwavering faithfulness, others serve as sober reminders of the consequences of sin. All of them have lessons to teach us about Christian living.

Set in Persia around 479 B.C., during the reign of the ruthless King Ahasuerus (Xerxes), the book of Esther is a dramatic narrative with profound spiritual insights.

The Search for a Queen

When Queen Vashti refused to come before King Xerxes and his drunken friends at a feast, she was banished. In search of a new queen, King Xerxes ordered all the beautiful women in the royal precinct of Susa to be brought to the palace so he could choose a wife.

During this time, there lived in Susa a Jewish man named Mordecai, who took care of his orphaned niece Esther, a girl of exceptional beauty. Esther was brought to the palace, and out of all the young women, she was selected as the king’s favorite and declared queen. As Mordecai had advised her, she told no one of her Jewish heritage.

One day, when Mordecai was walking outside the royal gates, he overheard two eunuchs plotting to assassinate the king. Mordecai told Esther of what he had heard, and she in turn, told the king. Thanks to Mordecai, he was able to stop the attempt and execute the conspirators.

Haman Plots Against the Jews

Following the foiled assassination attempt, Haman, a chief advisor to the king, periodically went outside the palace gates and demanded that the king’s servants bow to him. But Mordecai refused to bow to Haman. This infuriated Haman, and after he discovered Mordecai was a Jew, he conceived a plot to exterminate the Jews.

When Mordecai heard of this, he asked Esther to plead with the king on their behalf. However, Esther reminded Mordecai that whoever went to the king uninvited would face the penalty of death unless he extended his golden scepter. Mordecai urged Esther to visit the king anyway, as Esther 4:13-16 relates:

“Do not imagine that you are safe in the king’s palace, you alone of all the Jews. Even if you now remain silent, relief and deliverance will come to the Jews from another source; but you and your father’s house will perish. Who knows—perhaps it was for a time like this that you became queen?”

After hearing this, Esther asked Mordecai and the Jews in Susa to fast for three days, and she and her maids did the same. She said, “I will go to the king, contrary to the law. If I perish, I perish!”

As Haman walked home, Mordecai once again refused to bow to him. Infuriated, Haman ordered the construction of a gallows fifty cubits high for Mordecai’s execution.

That night, the king was unable to sleep, and asked for the chronicles of the city to be read to him. Hearing of Mordecai’s role in stopping the assassination, he inquired whether he had been rewarded, and his servant responded that he had not.

Haman was then brought in to the king’s presence. Esther 6:6-11 relates:

Later, the king and Haman attended Esther’s second banquet, where she told the king of the plot against the Jews. Disturbed by this revelation, the king asked who had organized it, and Esther replied, “The enemy oppressing us is this wicked Haman.” Upon hearing this, the king was incensed, and he had Haman executed upon the gallows built for Mordecai. After Haman’s execution, the king made a decree that the Jews could defend themselves on the day of the attack, and the Jews triumphed over their enemies.

What can we learn from Esther?

Esther demonstrated exceptional bravery and strength, willing to fulfill God’s purpose for her life, whatever the cost. While she could have been killed for visiting the king unannounced, she knew that a cause greater than herself was at stake. She willingly risked her life in order to have a chance to speak with the king, and because of her bravery, the mass slaughter of her people was stopped.

Esther’s role also reminds us of the fact that God has a unique purpose for each and every one of our lives. As a young orphaned Jewish girl living in Persia, Esther could have never imagined she would become queen and save all the Jews in Persia. Yet, God uses the least of us to accomplish his will, reminding us that it is in his strength, not our own, that we succeed.

Esther is portrayed touching the king’s scepter in a window in the Mary Help of Christians Chapel.

Basilica Insider: The Making of The Universal Call to Holiness
St. Lawrence and the True Treasure of the Church