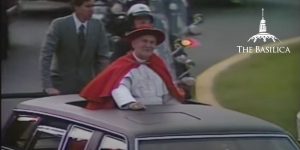 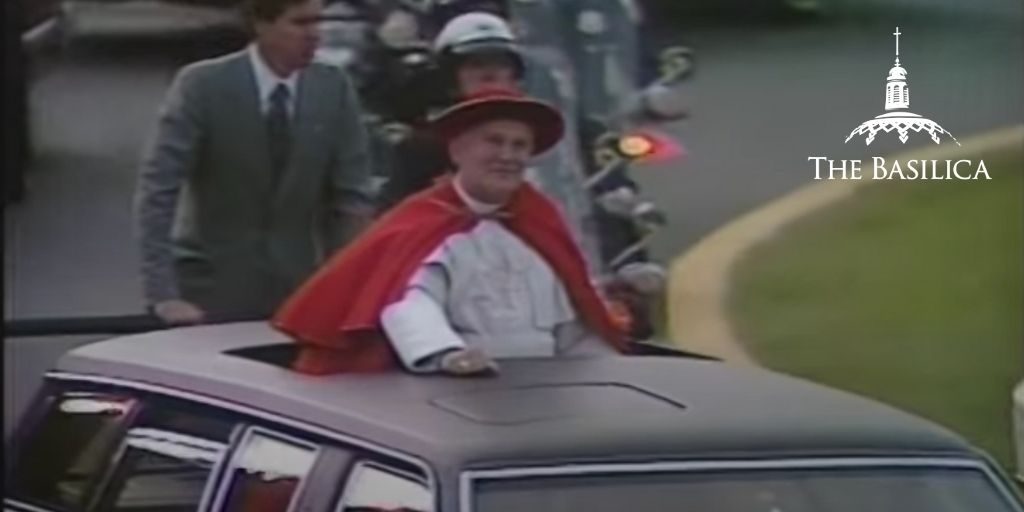 On September 23, 1920, the foundation stone for the National Shrine was placed by Archbishop James Cardinal Gibbons, surrounded by a joyous crowd of more than a thousand Catholics.

November 15, 1954 – Construction on the Shrine Resumes

With the help and efforts of Catholics from across the country, the site of the National Shrine became busy with workers as construction of the Great Upper Church began. Construction was renewed during the Marian Year 1953-1954, largely due to the efforts of Bishop John F. Noll of Fort Wayne, Chairman of the Episcopal Committee for the National Shrine.

November 20, 1959 – The Completion of the Great Upper Church and Dedication of the National Shrine

Thousands gathered for the blessing and dedication of the National Shrine upon the completion of the superstructure of the Great Upper Church, nearly 40 years after the foundation stone was placed.

1999 – The Installation of the Universal Call to Holiness Relief

Once the carving process was finished, the Universal Call to Holiness relief was packed up and shipped to Washington, D.C. in 16 pieces. Some of the individual pieces weighed over 9,000 pounds and were lifted to the Basilica with a crane. As the original rear wall of the Upper Church was built without anticipating the addition of nearly 40 tons on its face, the wall had to first be reinforced to carry the weight before the relief could be installed.

People from across America flocked to the nation’s patronal church to see Pope Benedict XVI when he visited the National Shrine. Inside the Basilica, Pope Benedict XVI viewed the Redemption Dome and the Incarnation Dome, as well as what would eventually be the Trinity Dome.

On September 23, 2015, Pope Francis was greeted by blue skies and a crowd of 25,000 faithful when he arrived at the National Shrine for the canonization Mass of Junipero Serra.

Each of the 14 million pieces of glass used in the Trinity Dome was initially shaped using a hammer and chisel. Since every tile was created for a specific place on the mosaic, if the tile broke incorrectly while being chiseled, the artisan had to take another piece of glass and begin the process again.

May 2017 – The Installation of the Trinity Dome mosaic

This behind-the-scenes video gives an inside look into the installation and construction process for the Trinity Dome.

The Trinity Dome Mosaic was dedicated in 2017, marking the completion of the National Shrine according to its original architectural and iconographic plans. Described as the crowning jewel of America’s Catholic Church, the Trinity Dome mosaic features the Most Holy Trinity, the Blessed Virgin Mary under her title of the Immaculate Conception, a procession of saints, and the four evangelists, encircled by the Nicene Creed.

The Basilica worked with the embassy of France to organize “Together with Notre Dame de Paris,” a special concert to benefit the rebuilding and restoration of the Cathedral of Notre Dame. The concert featured the Choir of the Basilica and Johann Vexo, the Notre Dame organist who was playing at the time the devastating fire broke out at the cathedral on the evening of April 15, 2019.