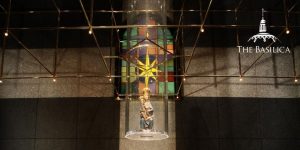 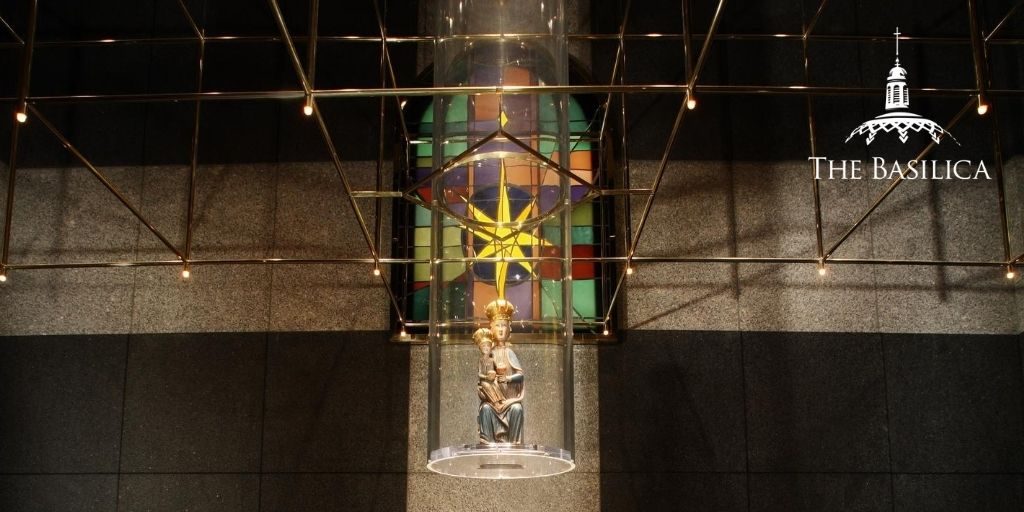 Known as the Great Mother of Austria, Our Lady of Mariazell provides guidance and provision. On September 27, 1992, the chapel honoring Mary under this title at the Basilica was dedicated by Bishop Egon Kapellari of Gurk-Klagenfurt, Austria. Today, we examine the history behind the Marian devotion of Mariazell and reflect upon how the Basilica honors its legacy of hope.

The Tradition of Our Lady of Mariazell

The tradition of the devotion to Our Lady of Mariazell dates back to 1157, when a miraculous event happened to a monk named Magnus. One day, when Magnus was traveling, he found his path barred by a vast boulder. Faced with this obstacle, he placed a small statue of Mary that he was carrying with him on the rock, and prayed for guidance. To his astonishment, the rock split in two, allowing him to pass. After this miracle, he built a small cell (in German “zell”) in which to live and pray. Over time, it became a monastery and a church, which still stands as pilgrimage site for the faithful today. 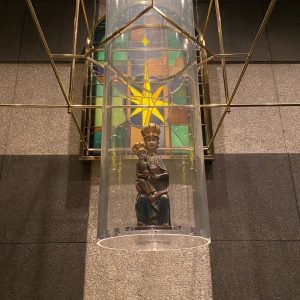 The Our Lady of Mariazell Chapel in the Basilica

This Marian devotion is honored in the Basilica in the Chapel of Our Lady of Mariazell, which was the first chapel to be donated to the Basilica by a country outside the United States. It is a gift of the Austrian Bishops Conference, the Austrian government, and Austrian-American Catholics. The focal point of the chapel is an exact replica of the statue of Our Lady of Mariazell, made of linden wood and measuring only 19 inches tall. Mary holds a fig, symbolizing sin, while Jesus holds an apple, symbolizing redemption. The statue features a red seal, indicating that it was touched to the original and carries the same graces. The chapel also contains the crests of the nine provinces of Austria and bronze masks of St. Leopold II and St. Clement Maria von Hofbauer.

Prayer to Our Lady of Mariazell

As we reflect upon Mary’s provision and the miracle that took place at Mariazell, let us meditate upon the prayer inscribed in the Chapel:

“O Mary, we call upon you. You are the Great Mother of Austria, the Mother of the Slavic peoples. You offer a safe haven for the exiled; you bring freedom and consolation to prisoners. We ask you, holiest of all virgins, to guard innocence and purity. Helper in all needs, assist us in danger when we call upon you. O Mary, guardian of the German Lands, we pray that you may banish the scourges of war and bring peace to all believers. Through your powerful intercession, console the disillusioned, bring back the erring, comfort the sick, and give hope to sinners. Great Mother Mary, Our Lady of Mariazell, bless and protect the people of the nations who honor you.”

Who Translated the Vulgate?
“Distinctively American”: The Architectural Vision of the National Shrine