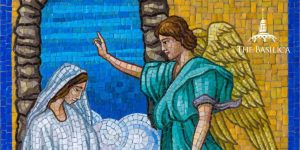 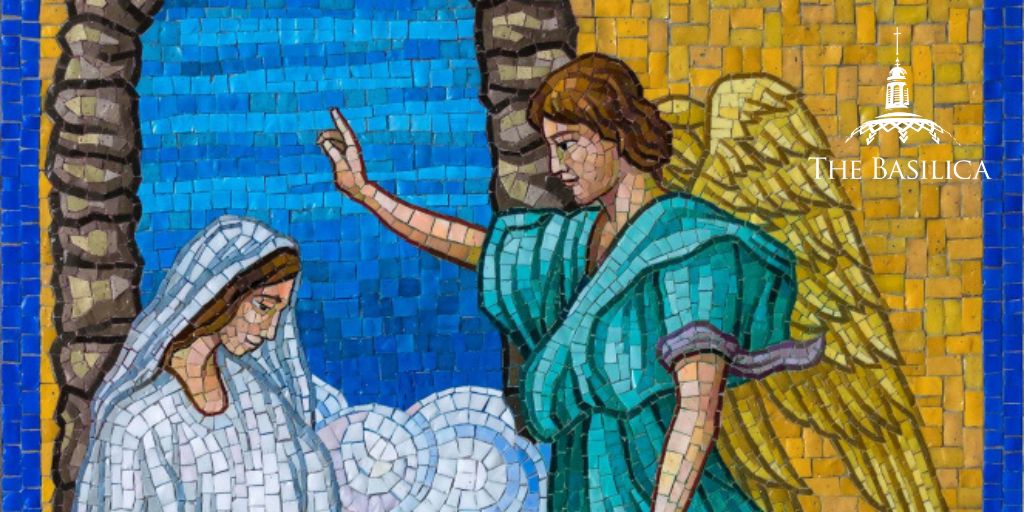 From worshippers and messengers to guardians and warriors, angels have a variety of roles throughout the Bible. As the Church celebrates the Feast of Saints Michael, Gabriel, and Raphael on September 29, we invite you to learn more about these three archangels and what the Bible tells us about their service to the Lord.

One of the most powerful archangels in the Bible, Michael is well known for his warrior prowess and is described as “a great prince” in the book of Daniel. Multiple Bible stories illustrate how he courageously fights against evil spiritual forces, such as in Jude, where he argues with the devil over the body of Moses, and in Revelation, where he leads the other angels in battle against the wicked dragon.

“Then war broke out in heaven; Michael and his angels battled against the dragon. The dragon and its angels fought back, but they did not prevail and there was no longer any place for them in heaven.”

At the Basilica, Michael is depicted in the Trinity Dome mosaic, as well as the Christ in Majesty mosaic.

Another prominent archangel was Saint Raphael, who is known for providing healing and guidance to the faithful. In the book of Tobit, he disguises himself as a human, accompanies Tobias on his journey, and restores the sight of Tobias’s blind father Tobit. He also aids a woman named Sarah, who was plagued by a demon that had killed her seven husbands, and unites her and Tobias in marriage. At the end of the book of Tobit, Raphael reveals himself to the couple as an angel. Tobit 12:15-18 says:

“’I am Raphael, one of the seven angels who stand and serve before the Glory of the Lord.’

Greatly shaken, the two of them fell prostrate in fear. But Raphael said to them: ‘Do not fear; peace be with you! Bless God now and forever. As for me, when I was with you, I was not acting out of any favor on my part, but by God’s will. So bless God every day; give praise with song.’”

Possibly the most recognized angel in the Bible, Gabriel is known for delivering important messages to God’s people. He had the privilege of appearing to Mary to reveal to her that she would bear the Christ Child. Luke 1:26-22 describes:

“In the sixth month, the angel Gabriel was sent from God to a town of Galilee called Nazareth, to a virgin betrothed to a man named Joseph, of the house of David, and the virgin’s name was Mary. And coming to her, he said, ‘Hail, favored one! The Lord is with you.’ But she was greatly troubled at what was said and pondered what sort of greeting this might be. Then the angel said to her, ‘Do not be afraid, Mary, for you have found favor with God. Behold, you will conceive in your womb and bear a son, and you shall name him Jesus. He will be great and will be called Son of the Most High, and the Lord God will give him the throne of David his father, and he will rule over the house of Jacob forever, and of his kingdom there will be no end.’”

Gabriel also informed Zechariah that his wife Elizabeth (Mary’s cousin) would bear a son — John the Baptist, who would prepare the way for the Lord.

In the art of the Basilica, you can find Gabriel in the Trinity Dome mosaic, the Annunciation Chapel, the southern façade, in the Incarnation Dome mosaic, and the Rosary Walk and Garden.

Each of these angels has different responsibilities: Michael is a warrior, Raphael is a guardian, and Gabriel is a messenger. But they share a common purpose: they act on behalf of God, helping His people and bringing Him glory. As Psalm 103:20 declares,

“Bless the Lord, all you his angels,
mighty in strength, acting at his behest,
obedient to his command.”

In honor of the Feast of Saints Michael, Gabriel, and Raphael, we invite you to light a candle today at the National Shrine. Vigil candles burn in the chapels throughout the Great Upper church and lower crypt level of the National Shrine. Each candle represents the faith of the supplicants and their fervent prayers entrusted to the loving intercession of the saints.