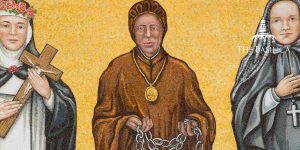 Josephine Bakhita’s life was marked by tragedy and hardship from a young age. While working in the fields with her mother at age nine, she was captured and sold into slavery. The trauma of the incident affected her memory of her name, and her captors called her “Bakhita,” meaning “fortunate.” She attempted to escape on numerous occasions, but never succeeded. She was sold five times throughout El Obeid and Khartoum.

In 1882 in Khartoum, an Italian consul named Callisto Legnani purchased Bakhita, and her life changed drastically. No longer did she suffer beatings at the hands of her master, but rather, she was treated gently and kindly.  She enjoyed being with Legnani and requested to accompany him when he traveled to Italy. Once they arrived in Italy, Legnani placed her in the household of the Michieli family, where she became a nanny for a time.

Sometime later, the Michielis were called away to the Red Sea to manage a hotel, and Bakhita took residence with the Sisters of the Institute of the Catechumens in Venice. It was here that everything changed: she realized that God’s love had been at work in the Italian families who had been so kind to her. As the sisters instructed her in the way of the Lord, Bakhita found the answers to the myriad of spiritual questions that been on her mind. In 1890, they baptized her and gave her the name by which we now know her – Josephine.

Spreading the Hope of Christ

Although the Michielis returned in due course, Josephine requested to stay with the Sisters, and Mrs. Michieli acquiesced. For the next 50 years, Josephine contributed to the order’s daily operations by cooking, sewing, and keeping the door. Her gentle spirit, sweet smile, and kind words of encouragement were an inspiration to all she met. Over a 20-year period, she wrote her autobiography. Following its publication in 1930, she traveled the world, sharing her story and the hope Christ had given her. Rather than hold the sins of her former masters against them, she chose forgiveness, remarking:

“If I was to meet those slave raiders who abducted me and those who tortured me, I’d kneel down to them and kiss their hands, because, if it had not been for them, I would not have become a Christian or a religious person.”

Praying for the Victims of Human Trafficking

Josephine’s story reminds us of the continual evil of human trafficking, and the need to lift in prayer those who suffer from its cruelties and horrors. As Pope John Paul II reflected at Josephine’s canonization:

In today’s world, countless women continue to be victimized, even in developed modern societies. In St. Josephine Bakhita, we find a shining advocate of genuine emancipation. The history of her life inspires not passive acceptance, but the firm resolve to work effectively to free girls and women from oppression and violence, and to return them to their dignity in the full exercise of their rights.

Honoring Our Lady of Lourdes in the Basilica
A Moment in History: the Papal Tiara at the Basilica