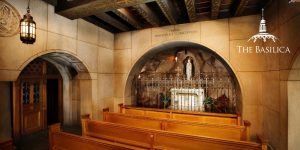 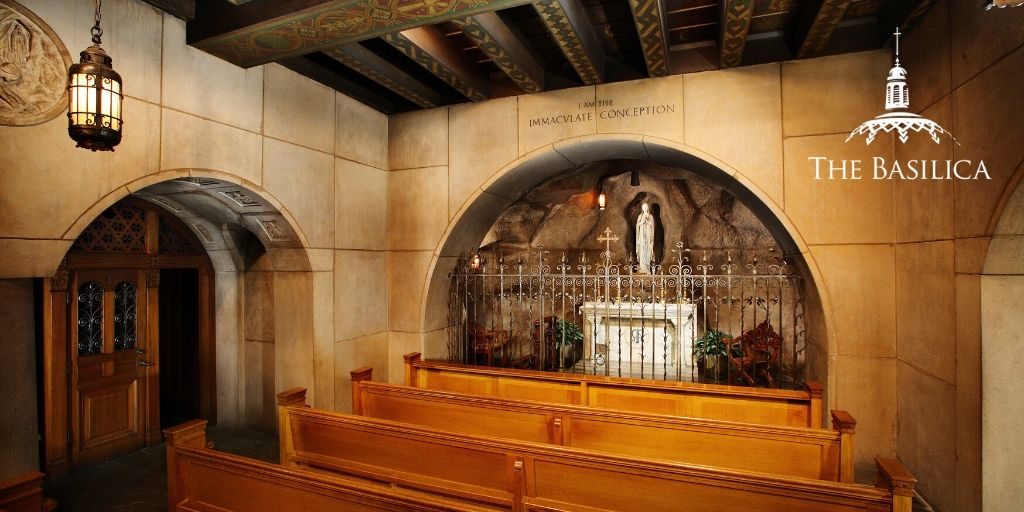 On February 11, we celebrate the Feast of Our Lady of Lourdes. The Basilica honors the Blessed Mother under this title in the Our Lady of Lourdes Chapel, which is the oldest chapel in the Basilica, as well as one of the most popular. According to tradition, the Blessed Mother first appeared to a young girl named Bernadette Soubirous in Lourdes, France on February 11, 1858. Bernadette was gathering firewood along the river when she saw a luminous woman amongst the stones in the grotto. In the months that followed, Bernadette continued to have 17 more visions of the woman, who declared to her on March 25, “I am the Immaculate Conception.”

Saint Bernadette and the Apparition at Lourdes

Catholic tradition holds that the Blessed Mother’s appearance at Lourdes transformed the area. On one of the occasions she appeared to Bernadette, she instructed her to dig beneath a rock – and from that spot, a spring began to flow. Since then, a number of unexplained and miraculous healings from the waters at Lourdes have been recorded by the Church. The water in the grotto is thought by many visitors to have healing properties, and every year, thousands come to drink it, bathe in it, or take it home. Today, this spring is one of the most-visited pilgrimage destinations in the world.

Honoring Our Lady of Lourdes in the Basilica

The miracles of Lourdes are honored in the Basilica in the Our Lady of Lourdes Chapel. This chapel is a replica of the Grotto of Massabielle in Lourdes, France, where, in 1858, the Blessed Mother appeared to Bernadette. The first chapel constructed outside of the Crypt Church, it is the gift of George Logan Duval. The text above the wrought iron gate reads, “I am the Immaculate Conception,” echoing the words of the Blessed Mother to Bernadette.

The Limestone rondels on the side walls tell of parallel miracles.  On the left, Bernadette is portrayed, at the command of the Blessed Mother, discovering the miraculous waters of the Lourdes. On the right, Moses is depicted at the command of God, striking the rock in the desert, from which water miraculously flowed (Numbers 20:11). The two rondels on the back wall illustrate Jesus healing the blind and the lame at the Pool of Bethesda (John 5:2-9), and Jesus restoring life to the daughter of Jairus (Mark 5:21–43; Luke 8:40–56). The hand-painted symbols on the wood ceiling represent the various invocations in the Litany of the Blessed Mother.

A Prayer to Our Lady of Lourdes

The chapel is inscribed with a prayer which reads:

Ever Immaculate Virgin Mother of Mercy, Health of the sick, refuge of sinners, Comforter of the afflicted, you know my wants, my troubles, my sufferings; look with mercy on me. By appearing in the Grotto of Lourdes, you were pleased to make it a privileged sanctuary, whence you dispense your favors; and already many sufferers have obtained the cure for their infirmities, both spiritual and corporal.

I come, therefore, with complete confidence to implore your maternal intercession. Obtain, O loving Mother, the grant of my requests. Through gratitude for your favors, I will endeavor to imitate your virtues, that I may one day share your glory. Amen.

In honor of Our Lady of Lourdes, we invite you to light a candle today at the Basilica. Vigil candles burn in the chapels throughout the Upper Church and lower crypt level of the National Shrine. Each candle represents the faith of the supplicants and their fervent prayers entrusted to the intercession of the Blessed Mother.