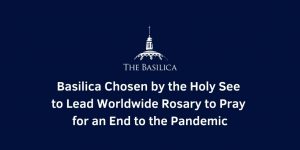 The Basilica of the National Shrine of the Immaculate Conception has been chosen by the Holy See to lead the worldwide recitation of the Rosary on Monday, May 17, at 12 noon ET/6pm Rome time, in response to Pope Francis’ call for a “marathon” of prayer during the month of May “to ask for the end of the pandemic.”

Cardinal Wilton Gregory, Archbishop of Washington and Chairman of the National Shrine Board of Trustees, will prayerfully lead the Joyful Mysteries of the Rosary from the Basilica’s Great Upper Church.

With the ability to accommodate 1,000 people socially distanced in the Great Upper Church with other safety protocols in place, the event is open to the public and the faithful are encouraged to join this vital prayer effort in person by registering at www.nationalshrine.org/mass-registration.

For those unable to attend in person, the recitation of the Rosary will be livestreamed at www.nationalshrine.org/mass and will be shared with the Holy See for transmission throughout the world.

Initiating this worldwide Rosary marathon from St. Peter’s Basilica on May 1, Pope Francis said, “At the beginning of the month dedicated to Our Lady, we join in prayer with all the shrines around the world, the faithful, and all people of good will to entrust to our Holy Mother all of humanity so harshly tried by this pandemic.”

The Basilica of the National Shrine of the Immaculate Conception is among only 30 shrines from around the globe chosen to lead a day of prayer during the monthlong Rosary marathon. On May 17, the National Shrine has been asked to pray specifically for all world leaders and for all heads of international organizations as it leads the Joyful Mysteries of the Rosary.

Monsignor Walter Rossi, Rector of the Basilica, said, “It is an honor for us to participate in this important initiative of the Holy Father as he invites the world to offer this great Marian prayer. It is my hope that, through this monthlong worldwide praying of the Rosary, Our Blessed Mother will look favorably upon our pleas and present our great need before her Son, asking God, through her intercession, to bring an end to the pandemic and return our world to a form of normalcy.”

View Press Release as a PDF

Life with Lepers: The Extraordinary Story of St. Damien
Faces of the Basilica: Greta and Victor David