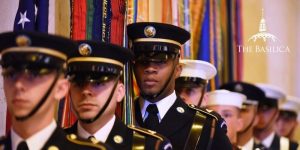 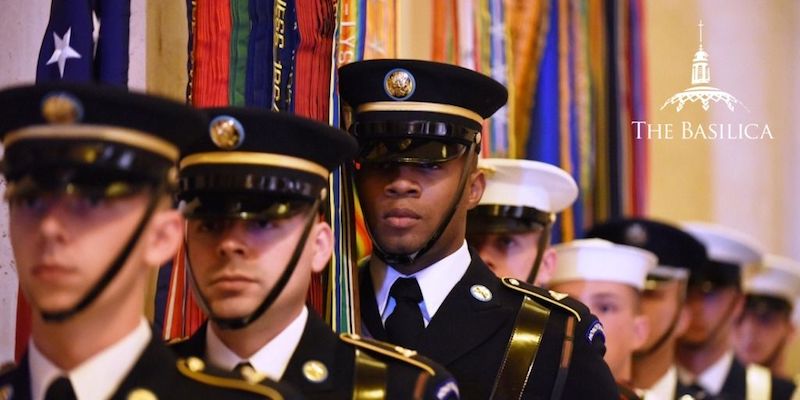 Commemorated to honor the men and women who died in military service for the United States, Memorial Day reminds us of the beauty of self-sacrifice, particularly in laying down one’s life for the sake of others. The Archdiocese of the Military Services, USA hosted its annual Pilgrimage and Memorial Mass on May 19th, remembering those who died and reflecting on love and sacrifice.

The service began with the posting of colors and the singing of the National Anthem and concluded with the playing of Taps. The homily, delivered by Most Rev. Timothy P. Broglio, Archbishop of the Military Services, USA, honored “the self-giving so typical of the military and their families” and examined how a Christian is called to love:

“Love of God and neighbor was already present in the Old Testament, but Jesus adds a model to the precept: Love as I have loved you. As the Bishop of Rome said at the Regina Caeli this noon: ‘The newness of this precept is completely found in the love of Jesus Christ, with which he has given his life for us.’ It is the love of God, universal, without conditions and without limits which found its apex on the cross.”

The Archbishop noted that the men and women who sacrifice their lives to protect their countrymen are ultimately answering the call to live like Christ:

“Does not authentic service to the nation also express fidelity to the Commandment of Love? It is a recognition of that service that beckons us into this magnificent Basilica this afternoon.”

He then called upon the congregation to pray for those in the United States Armed Forces:

“You know that this annual celebration is an occasion to pray especially for the eternal repose of those who have fallen, either on the battlefield, or as veterans years later. We pray in a particular way for those retired chaplains and other priests who have passed away since our last gathering. We also honor those who serve in the military, those who serve beyond our borders, the veterans, and those who are wounded in body and spirit. We beg Divine Mercy upon all of them, and we ask for the stamina to imitate their love. After all, they served without knowing exactly for whom they would serve, and for whom they might give their lives. They exhibit an understanding of the Divine Commandment, so fundamental and emblematic of the Christian community for all times and in all places.”

The full Memorial Mass celebrated at the Basilica is broadcast on EWTN on Memorial Day, Monday, May 27 at 12:00 noon ET. Please tune in to reflect on love and sacrifice, and to honor the sacrifice of our men and women in the United States military who paid the ultimate price. You can also view the Memorial Mass on our Facebook page.