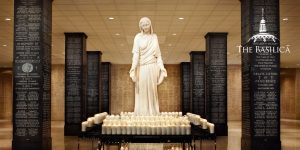 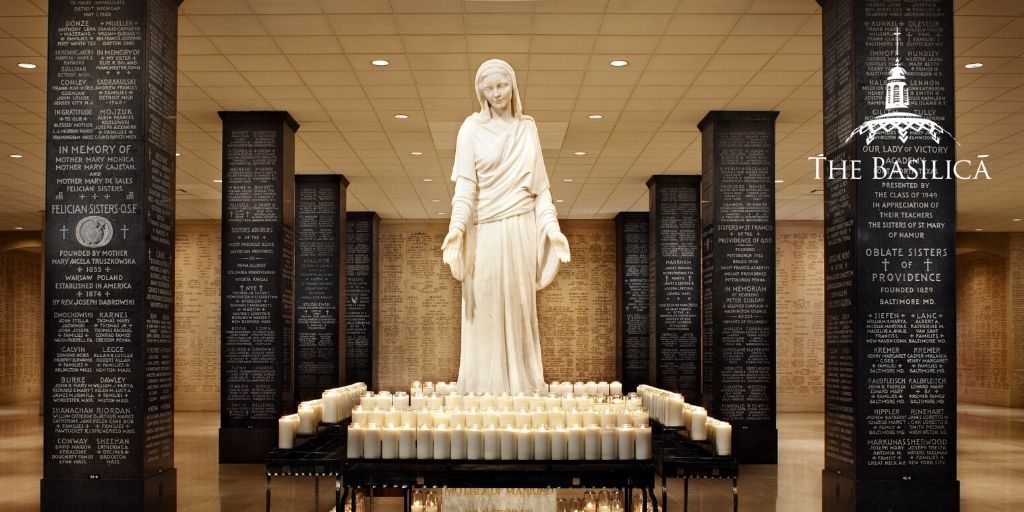 On May 8, 1937, the day before Mother’s Day of that year, the National Shrine unveiled the Mary, Mother of Mankind statue. It was the first work of art commissioned by the National Shrine, and today it remains the focal point of Memorial Hall, reminding us of Mary’s motherhood over all the human race. As we look ahead to Mother’s Day this year, we invite you to reflect on why we honor Mary under this title, and draw comfort from her loving protection.

Why We Honor Mary as Mother of Mankind

According to the Second Vatican Council, Jesus, through his declaration on Calvary, did not limit Mary’s spiritual motherhood to just his disciples, but rather extended it to all the human race. As John Paul II explained in 1997:

In saying that Mary is “a mother to us in the order of grace,” the Council stresses that her spiritual motherhood is not limited to the disciples alone, as though the words spoken by Jesus on Calvary: “Woman, behold your son” (John 19:26), required a restrictive interpretation. Indeed, with these words the Crucified One established an intimate relationship between Mary and his beloved disciple, a typological figure of universal scope, intending to offer his Mother as Mother to all mankind.

Mary’s Role as Mother of Mankind

What exactly does it mean to say that Mary is the Mother of Mankind? Catholic tradition holds that Mary is set apart because of her participation in the story of divine redemption; not only is she a unique member of the Church, but she also serves a unique role by encouraging the faithful to more closely imitate the way of Christ. As Pope John Paul II has remarked, following Jesus’ words at Calvary:

From that moment, no one on earth would any longer be “an orphan.” Well aware of this, the Church has never stopped drawing beneficial consequences from Mary’s “motherhood.” … She is Mother to all and Mother forever. The goal of her mission is to reproduce in believers the features of her first-born Son, bringing them at the same time to recover ever more clearly that image and likeness of God in which they were created (cf. Paul VI, Apostolic Exhortation Marialis cultus, n. 57; cf. Genesis 1:26).

How Mary Offers Hope and Comfort to Mankind

The faithful of the Church can find peace in the comfort of Mary, Mother of Mankind, as Pope John Paul has noted:

The faithful know they can count on the heavenly Mother’s concern: Mary will never abandon them. By taking her into their own home as a supreme gift from the heart of the crucified Christ, they are assured a uniquely effective presence in the task of showing the world in every circumstance the fruitfulness of love and the authentic meaning of life.

The Basilica’s Statue of Mary, Mother of Mankind

The Mary, Mother of Mankind statue was donated by Elizabeth Marable Brennan and her husband, Judge Philip A. Brennan. Harry Eversfield Donohue sculpted the statue, for which his wife, Ruth Patrice Donohue, served as model. Both couples were present at the statue’s dedication in 1937. The dedication of the statue marked the tenth anniversary of the Mary’s Day Movement, which Mrs. Brennan promoted in 1927 and the International Federation of Catholic Alumnae inaugurated in 1928.

Our Lady of Fatima: Protection and Guidance in Uncertain Times
Basilica “Lights it Blue” to Support Healthcare Workers