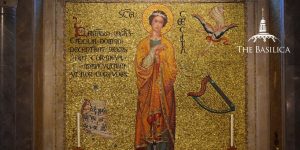 On November 22, the Church traditionally observes the Feast of St. Cecilia, the patroness of music, musicians, instrument makers, and poets. In her short life, she exemplified a spirit of holiness, willing to give the ultimate sacrifice for the name of Christ. Today we reflect not only on St. Cecilia’s story of faithfulness, but the importance of music as worship.

According to some accounts, Cecilia was born into an affluent Roman family in the days of the early Church. Cecilia was coerced into an arranged marriage with a man named Valerian, who was not a Christian. It is thought that during the wedding, she was unable to hear the sound of her wedding music because she was so focused on the silent song of her heart to God.

Cecilia Leads Her Husband to the Lord

On her wedding night, she requested that her husband forego consummating the marriage, saying that it would upset her guardian angel. Valerian responded by asking to see this angel, and Cecilia said that it would only be visible if Valerian was a Christian. Valerian then accepted Christ, and was able to see the angel of which she spoke.

Faithful Unto the End

Cecilia lived out her vow of virginity, and Valerian was baptized, along with his brother Tiburtius. Together they undertook the work of burying Christians who had been martyred – a practice which was illegal at the time. The brothers were arrested and pressed to renounce their faith and sacrifice to the Roman gods. When they refused, they were scourged and beheaded, and Cecilia was arrested for burying their bodies.

When the authorities tried to execute her, however, they ran into difficulties. They first attempted to suffocate her by locking her in her bathroom and heating the furnace to an unbearable temperature, yet she was unharmed. Next, they attempted to behead her, slashing her neck three times without success. Cecilia lived for three days after the attack before she passed away.

How the Basilica Honors Saint Cecilia

St. Cecilia is honored in the Basilica in the Saint Cecilia Chapel, where she is depicted in mosaic. The altar panel contains approximately 60,000 tesserae, and the reredos mosaics are “Venetian” or “enamel” mosaic. The individual tesserae are fashioned of glass and enamel – the same type of material used in the mosaics of the Early Christian era. Lyres ornament the marble altar, and a crown of flowers on the altar frontal symbolizes the heavenly crown worn by Roman virgins. The Latin text translates, “While the organ was playing, Cecilia sang to the Lord saying: ‘Let my heart be spotless so that I may not be confounded,’” (Lauds, First Antiphon).

The Biblical Imperative for Music as Praise

In honoring St. Cecilia’s legacy, we reflect on the significance of music as worship in the Church. The Scriptures are replete with exhortations to worship with music. As Christians, we are called to glorify our Lord through song and melody, lifting up His name in praise and thanking him for his goodness: 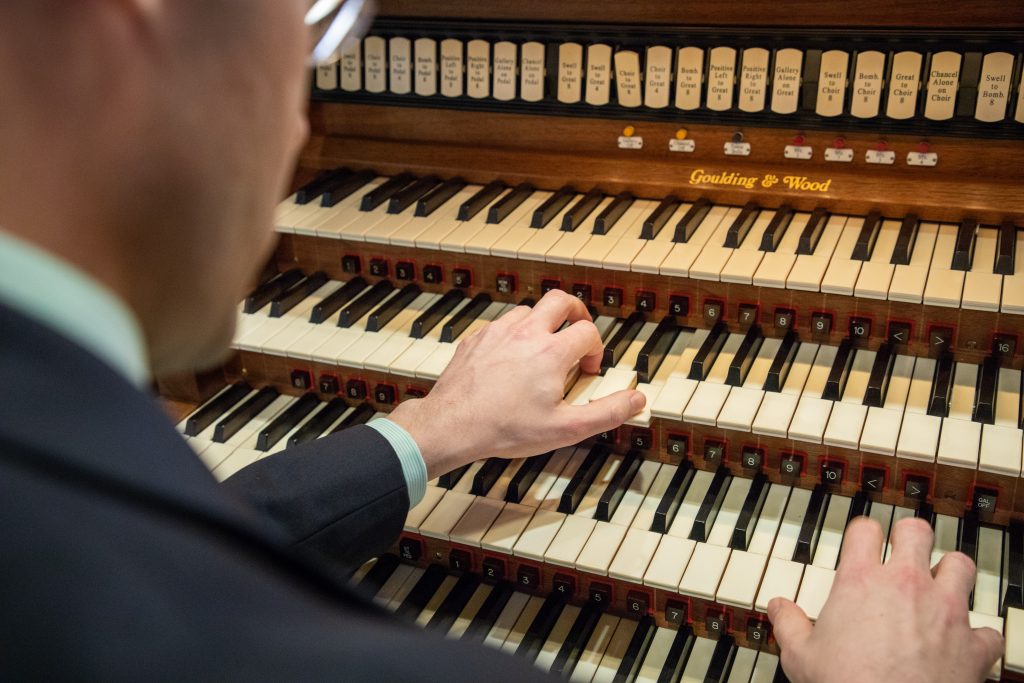 …But be filled with the Spirit, as you sing psalms and hymns and spiritual songs among yourselves, singing and making melody to the Lord in your hearts, giving thanks to God the Father at all times and for everything in the name of our Lord Jesus Christ. – Ephesians 5:18-20

Hallelujah!
Praise God in his holy sanctuary;
give praise in the mighty dome of heaven.
Give praise for his mighty deeds,
praise him for his great majesty. – Psalm 150:1-2
Shout with joy to the Lord, all the earth;
break into song; sing praise.
Sing praise to the Lord with the lyre,
with the lyre and melodious song.
With trumpets and the sound of the horn
shout with joy to the King, the Lord.
Let the sea and what fills it resound,
the world and those who dwell there. – Psalm 98:4-7

In honor of St. Cecilia, we invite you to light a candle today at the Basilica. Vigil candles burn in the chapels throughout the Upper Church and lower crypt level of the National Shrine. Each candle represents the faith of the supplicants and their fervent prayers entrusted to the intercession of the Blessed Mother.

Light a candle
10 Verses About Thanksgiving
Celebrating Our Redemption