As the nation’s preeminent Marian shrine, the Basilica is dedicated to the patroness of the United States, the Blessed Virgin Mary under her title of the Immaculate Conception. Throughout its art and architecture, visitors can find many different tributes to Marian devotions and doctrines. Today’s post highlights the West Tympana of the Great Upper Church, which depict significant Marian doctrines and their dates of affirmation in sculpted marble. 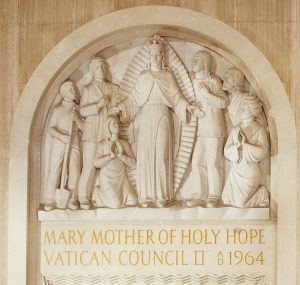 According to the Vatican Council II in 1964, Mary was declared the Mother of Holy Hope for her role in bringing Christ into the world. As Chapter 8 of Lumen Gentium states:

“Through her faith and obedience she gave birth on earth to the very Son of the Father, not through the knowledge of man but by the overshadowing of the Holy Spirit, in the manner of a new Eve who placed her faith, not in the serpent of old but in God’s messenger without wavering in doubt. The Son whom she brought forth is he whom God placed as the first born among many brethren (Rom. 8:29), that is, the faithful, in whose generation and formation she cooperates with a mother’s love.”

Mary’s faith and obedient heart brought redemption and hope to a world struggling in darkness and sin. Above the tympana, the inscription reads, “Mary is a sign of sure hope and solace for the people of God.” 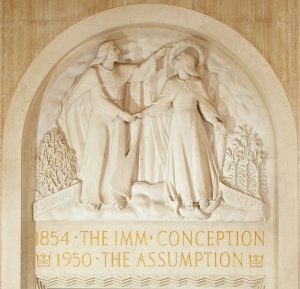 The middle tympana honors Mary as the Immaculate Conception and affirms the doctrine of the Assumption. Though this doctrine had long been held in tradition by the Church, it was not until 1854 that Pope Pius IX defined and affirmed it as an official belief of the Church. As he stated in Ineffabilis Deus:

“We declare, pronounce, and define that the doctrine which holds that the most Blessed Virgin Mary, in the first instance of her conception, by a singular grace and privilege granted by Almighty God, in view of the merits of Jesus Christ, the Savior of the human race, was preserved free from all stain of original sin, is a doctrine revealed by God and therefore to be believed firmly and constantly by all the faithful.”

As the Christ-bearer, Mary is held as holy from her conception; a holy vessel for the carrying of the Christ Child.

The Assumption is described in Section 966 of the Catechism of the Catholic Church and was affirmed by Pope Pius XII in his apostolic letter Munificentissimus Deus:

“Now God has willed that the Blessed Virgin Mary should be exempted from this general rule [death]. She, by an entirely unique privilege, completely overcame sin by her Immaculate Conception, and as a result she was not subject to the law of remaining in the corruption of the grave, and she did not have to wait until the end of time for the redemption of her body.”

This declaration officially affirmed a belief that had been celebrated since the early days of the Church: that Mary remained sinless throughout her life and was drawn into heaven.

Mary, Mother of the Church 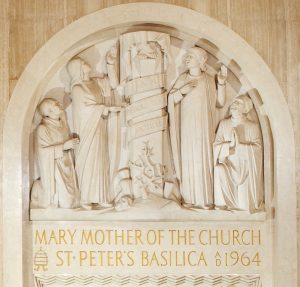 At the end of the Second Vatican Council, St. Paul VI declared Mary the Mother of the Church:

“[W]e proclaim the Most Blessed Mary Mother of the Church, that is to say of all the people of God, of the faithful as well as of the pastors, who call her the most loving Mother. And we wish that the Mother of God should be still more honored and invoked by the entire Christian people by this most sweet title.”

Why should you pray the Rosary?
Celebrating Sister Bernadette’s Diamond Jubilee