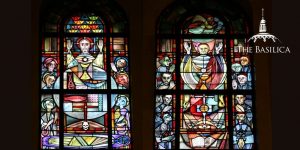 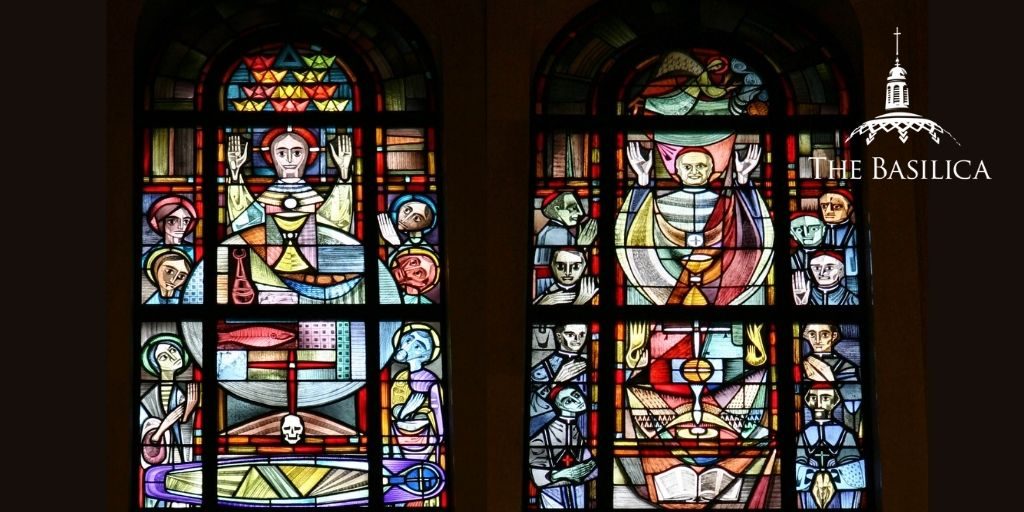 In the four ambulatories of the Great Upper Church, there are four intricate stained-glass windows depicting the four ends of the Mass. The light that streams through these panes illuminates both the Basilica and profound spiritual truths. Today, we invite you to learn about the deeper meaning reflected in each of these windows, which were created by craftsman Emil Frei, and installed in the Basilica in 1964. 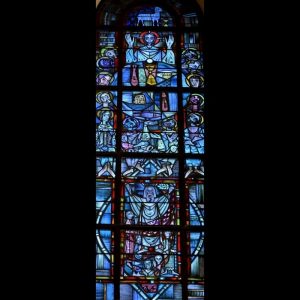 In the west apse, the first window explores the theme of atonement. The top fan portion of the window shows a sacrificial lamb, under which is the Lord’s Supper.

“While they were eating, Jesus took bread, said the blessing, broke it, and giving it to his disciples said, ‘Take and eat; this is my body.’ Then he took a cup, gave thanks, and gave it to them, saying, ‘Drink from it, all of you, for this is my blood of the covenant, which will be shed on behalf of many for the forgiveness of sins. I tell you, from now on I shall not drink this fruit of the vine until the day when I drink it with you new in the kingdom of my Father.’” — Matthew 26:26-29

This significant act of Jesus instituted the Eucharist and serves as a lasting symbol of His sacrificial atonement for our sins, upon which we reflect each Mass.

Its Old Testament parallel is depicted underneath: Moses sprinkling the Israelites with the blood of the covenant, as described in Exodus 24:8. 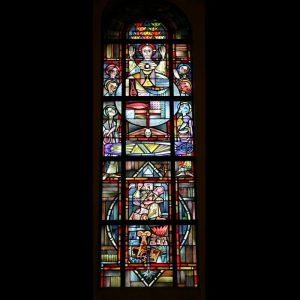 The Adoration window is topped by 24 crowns, representing the 24 elders of Revelation and their worship of the Lamb:

“When he took it, the four living creatures and the twenty-four elders fell down before the Lamb. Each of the elders held a harp and gold bowls filled with incense, which are the prayers of the holy ones. They sang a new hymn:

‘Worthy are you to receive the scroll
and to break open its seals,
for you were slain and with your blood you purchased for God
those from every tribe and tongue, people and nation.
You made them a kingdom and priests for our God,
and they will reign on earth.’” — Revelation 5:8-10

Underneath is a replica of a catacombs illustration of Jesus breaking bread, known as Fractio Panis: Breaking of the Bread in Apostolic Times. The lowest portion of the window shows Abraham sacrificing Isaac, which is found in Genesis 22. Each of these biblical events reminds us that every good and perfect thing is provided for us by God, and as a result, He deserves our greatest praise and adoration. We should be willing to give all to Him, because He has given all to us. 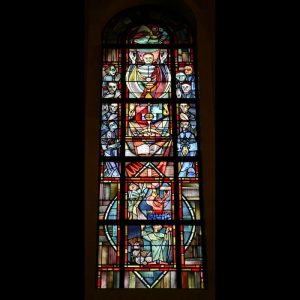 At the top of the Petition window, an angel holds a golden bowl of incense, which represents the prayers of the saints. The middle section depicts Mass in the modern times, specifically that of the Ecumenical Vatican Council II. It shows Pope John XXIII with Cardinals Montini, Ritter, Spellman, Cushing, McIntyre, and Meyer. The Old Testament portion of the window shows Abel offering his proper sacrifice before God:

“In the course of time Cain brought an offering to the Lord from the fruit of the ground, while Abel, for his part, brought the fatty portion of the firstlings of his flock. The Lord looked with favor on Abel and his offering.” — Genesis 4:3-4

Together, the images of the window show us that, if we come before God in humility, like Abel, He hears our petitions. 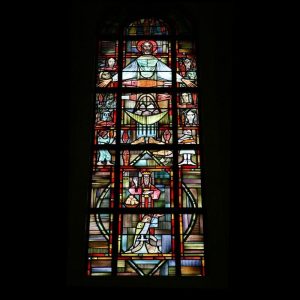 The upper part of the window represents the great multitude from Revelation Chapter 7. Below, in the center portion, Jesus performs the miracle of the loaves and fishes, one of the most prominent in the gospels and a beautiful picture of God’s provision:

“And he ordered the crowds to sit down on the grass. Taking the five loaves and the two fish, and looking up to heaven, he said the blessing, broke the loaves, and gave them to the disciples, who in turn gave them to the crowds. They all ate and were satisfied, and they picked up the fragments left over—twelve wicker baskets full. Those who ate were about five thousand men, not counting women and children.”
— Matthew 14:19-21

In Genesis Chapter 14, after Abram defeated the five kings of Sodom, Gomorrah, Admah, Zeboiim, and Bela, and rescued Lot, the priest Melchizedek blessed the bread and wine for Abram. This scene is portrayed in the bottom of the window. The different scenes and symbols featured in the window remind us that God in his bounty provides for us, and for that, we give him thanks.

Basilica to Implement Registration & Ticketing for the First Time
The Fruit of the Spirit Part II: Patience, Kindness, Generosity