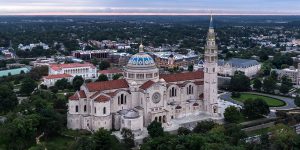 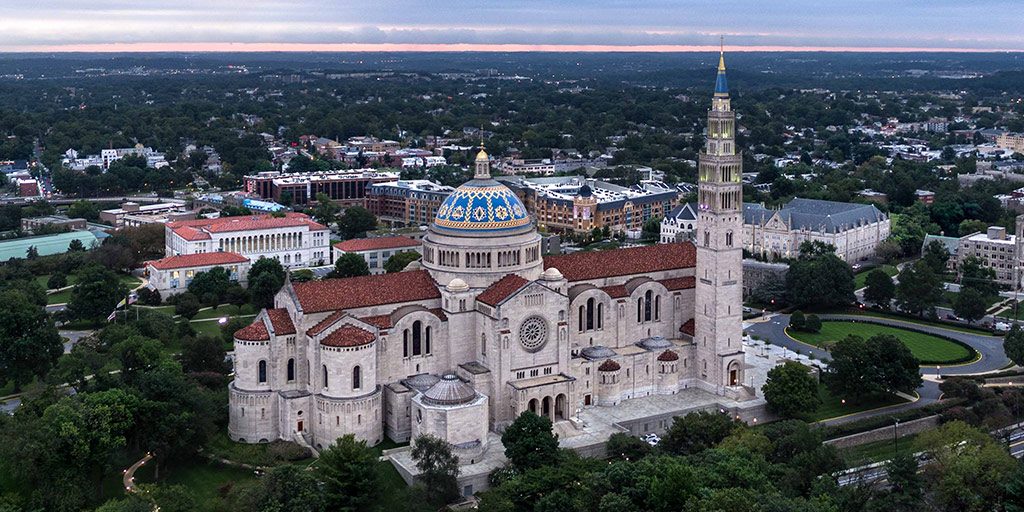 As a first-time visitor to the National Shrine, deciding what to see can be overwhelming. With more than 80 chapels and oratories, it can be difficult to take it all in, especially if you are only visiting for the day. What are the best things for first-time visitors to see and do? Review these recommendations from the staff of the Basilica.

The first part of the Basilica to be built, the Crypt Church is, in many ways, the heart of the National Shrine. It is here that the first Mass was celebrated in 1924 and where the Blessed Sacrament has been reposed in the tabernacle since 1926. The 2.5-ton Algerian onyx Mary Memorial Altar stands as the focal point.

2. Our Lady of Lourdes Chapel

One of the most quiet and serene places in Basilica, this chapel is a replica of the Grotto of Massabielle in Lourdes, France, where Mary appeared to Bernadette Soubirous, a peasant girl. Above its wrought iron gate is the inscription “I am the Immaculate Conception.”

3. Our Lady of Częstochowa Chapel

This chapel is remarkable not only for its beauty, but also because of its ties to Saint Pope John Paul II. While he was Archbishop of Krakow, Karol Cardinal Wojtyla visited the National Shrine in 1976. Three years later, he returned as Pope John Paul II, praying in this chapel.

The Papal Stole worn by Saint Pope John XXIII at the opening of the Second Vatican Council and the Coronation Tiara of Blessed Pope Paul VI are located on the bridge of Memorial Hall. Also displayed on the south end of Memorial Hall are first class relics of Saints Pope John XXIII and Pope John Paul II, papal thrones of Popes St. John Paul II, Benedict XVI, and Francis, their zucchettos worn during their visits to the Basilica, and the Papal Rose that Pope Benedict XVI bestowed upon the Basilica during his 2008 visit.

5. Avail yourself of the Sacraments

The Eucharist is the source and summit of the Christian Life and is available at the more than 40 Masses celebrated each week at the Basilica. The Sacrament of Penance and Reconciliation is also widely available at the Basilica with more than 30 hours of Confession heard each week. View Mass and Confession times here. You can also spend time with the Lord in our Blessed Sacrament Chapel located in the Great Upper Church.

If you have time, we highly recommend taking a free guided tour of the Basilica. The hour-long tour includes visits to the Great Upper Church and Crypt level chapels with details about the history, art, and architecture of our nation’s preeminent Marian shrine and patronal church. Find out more about tours.

7. Visit the Bookstore and Gift Shop

The Basilica has a large and unique selection of Catholic books and gifts, including Marian jewelry, crucifixes, religious art, and rosaries. Books range from philosophical works, to illustrated children’s books, piano books, and more. View Bookstore and Gift Shop hours.

The Basilica is open seven days a week, 365 days a year, so you can visit the Basilica at any time! Come on a quiet day to explore at your own pace or check out our calendar to join us for any of our scheduled events.

What We Know about the Life of St. Francis of Assisi
Saint Thérèse of Lisieux - a “Little Flower” in God’s Garden