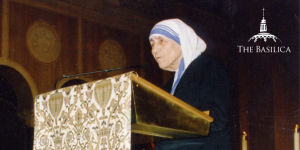 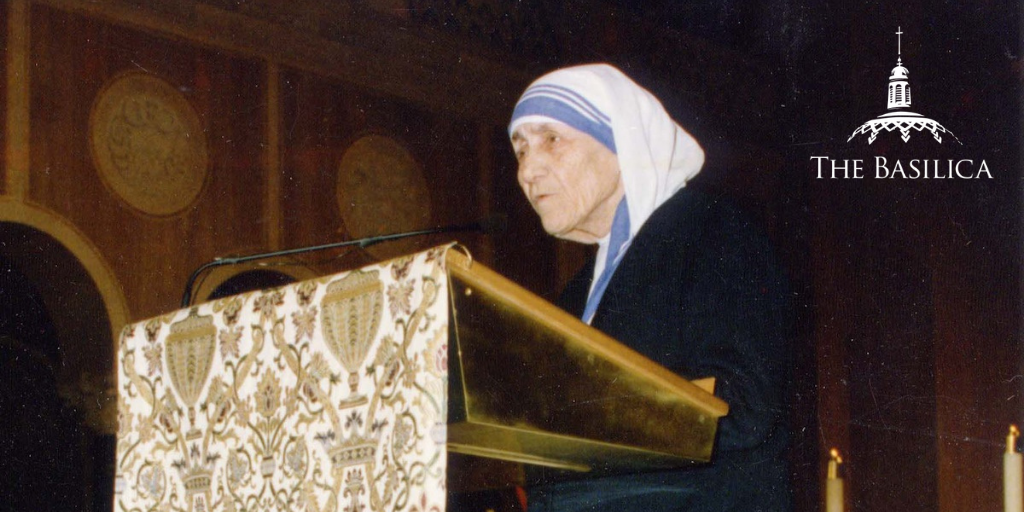 Whether serving as mothers or military commanders, women have enabled the Church to flourish throughout the centuries. From Joan of Arc’s leadership of the French army, to the quiet bravery of St. Monica, who fervently prayed for her son’s salvation, each of these women saints provide beautiful examples of the great things that can be accomplished through faith. Today, in honor of International Women’s Day, we’re highlighting three inspirational women saints featured in the art of the Basilica.

Born in the 4th century, St. Monica is recognized as the patron saint of mothers. Her faith and dedication to motherhood played a pivotal role in the spiritual formation of one of the most brilliant philosophers and well-known saints of all time – St. Augustine, her son.

After her husband’s premature death, St. Monica dedicated her life to raising her three children and leading them to Christ. However, Augustine remained uninterested in Christianity throughout childhood and young adulthood. But Monica never gave up hope, and after many years of prayer, she finally saw him give his life to the service of God. She passed away in A.D. 387, shortly after he was baptized.

St. Augustine later declared that his mother’s resilience and dedication to prayer led him to become a man of God. Her legacy serves as a reminder for all Christians to never stop praying for those who do not yet know Christ.

St. Monica is featured in one of the North Nave Bays of the Great Upper Church.

Joan of Arc: A Fearless Leader

In the early 1400s, when she was just 13, Joan of Arc received a miraculous vision in which the Archangel Michael and two women saints encouraged her to help restore the dauphin (the king of France’s eldest son) to the throne. At first, she was not taken seriously when she offered her assistance to the dauphin, but eventually he accepted her help. Joan became a military commander, helping the struggling army break a siege on Orleans and leading them in a series of impressive victories. She became known as the “Maid of Orleans,” and when the dauphin was restored to the throne in 1429, Joan lived as a member of the royal court. She was also granted a coat of arms for her heroic actions.

In a later military conflict, Joan was captured by the rebels of Burgundy and sold to England. There, she was imprisoned and subjected to constant interrogation as an ecclesiastical court tried to convict her of heresy. When the court could find no fault with her theology, she was eventually convicted for wearing men’s clothing. On May 30, 1431, 19-year-old Joan was burned at the stake. Two decades later, her family petitioned to have her case retried, and she was declared innocent. However, she wasn’t canonized until nearly 500 years later, when in May of 1920, the Church recognized her heroic faith.

St. Joan of Arc is featured in the Southwest Nave Bay, and the Our Lady of Lourdes Chapel also contains a stone from the dungeon in which she was imprisoned before her execution.

Mother Teresa was born in Macedonia on August 26, 1910. When she was only eight, her father died unexpectedly, leaving her mother to raise her with the help of a supportive community in the Jesuit parish of the Sacred Heart. At age 18, Teresa joined the Institute of the Blessed Virgin Mary in Ireland, and shortly after travelled to India, where she began to teach at St. Mary’s School for girls. After her final Profession of Vows in 1937, she became known as Mother Teresa, and served as both a teacher and the principal of the school in 1944.

Two years later, Teresa began to have a series of visions in which she felt Christ calling her to care for the poor. In response, she founded the Missionaries of Charity, dedicated to helping those in poverty. The congregation of the Missionaries of Charity was officially established in the Archdiocese of Calcutta in October of 1950, and a decade later, sisters of the order began traveling to different areas of India to serve. Later, Mother Teresa founded additional houses in locations across the world, as well as a number of other religious and non-religious organizations which also sought to help underserved communities. She visited the National Shrine on several occasions during her travels.

As Mother Teresa’s ministry grew, multiple awards were presented to her in recognition of her dedication to helping the impoverished, including the Nobel Peace Prize in 1979. Despite her renown, she remained grounded in her commitment to humility and holiness – a goal she believed every person of faith could strive for. Even as she faced debilitating health problems, Mother Teresa continued her work until she passed away on September 5, 1997. The impact of her ministry was so significant that Pope John Paul II waited only two years after her death to beatify her, instead of the customary five years, and she was canonized on September 4, 2016.

She is depicted in multiple areas of the Basilica, including the Lower Sacristy window of the Crypt Church, Hall of American Saints, the Trinity Dome Mosaic, and the Universal Call to Holiness.