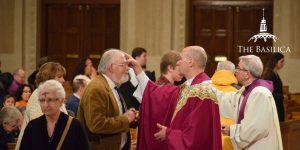 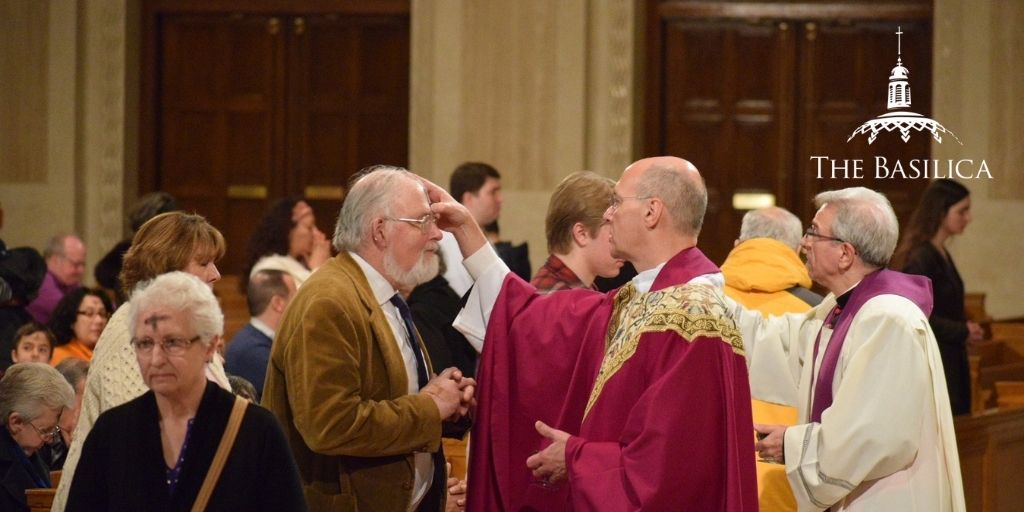 As we observe Ash Wednesday and enter the season of Lent, we prepare our hearts for a period of reflection and penitence, meditating on Christ’s sacrifice for us. To an outsider, the practices of the season may admittedly seem curious: putting ash on one’s forehead, abstaining from meat on Fridays, or giving up something for 40 days. Yet each of these practices is rooted in the Bible and tradition, serving to orient our hearts and minds during this penitential season.

Today, Monsignor Walter Rossi, Rector of the Basilica, answers some of the most common questions surrounding Lent and explains why we do what we do.

Why do the faithful put ashes on their heads for Ash Wednesday? Where do the ashes come from?

The custom of being “covered with ashes” was introduced in the Catholic Church back in the second century, but, only around the year 1000 did the placing of ashes on the head become part of the Ash Wednesday Liturgy as a symbol of recognizing our sinfulness and repentance.

The ashes themselves come from burnt palm that was blessed the previous Palm Sunday.

How did this practice originate, and what is its biblical significance?

The use of ashes finds its origin in the Old Testament. While there are many references, the most significant for Ash Wednesday is from the Book of Job, “therefore I disown what I have said, and repent in dust and ashes (42:6) as well as the response of the King of Nineveh to the preaching of Jonah, “he rose from his throne, laid aside his robe, covered himself with sackcloth, and sat in ashes” (Jonah 3:6). Ashes are a symbol of mortality, mourning, humility, and penance.

Why do the faithful fast on Ash Wednesday?

Ash Wednesday is a day of Universal Fasting and Abstinence. This means for all Catholics over 18 years of age to the beginning of their 60th year, one full meal is allowed. Two smaller meals, sufficient to maintain strength, may be taken according to one’s needs, but together should not equal another full meal, unless dispensed or excused.

Abstinence from meat is to be observed by all Catholics who are 14 years of age or older. Ash Wednesday, every Friday of Lent, and Good Friday are days of abstinence.

This year, because the Solemnity of the Annunciation falls on Friday, March 25, 2022, because it is a Solemnity the law of abstinence from meat and meat products does not apply (Code of Canon Law 1251). Fasting and Abstinence “[express] conversion in relation to oneself, to God and to others” (Catechism of the Catholic Church 1434) and are meant to open us to God’s presence. Where fasting and abstinence have created a human void, God replenishes with His grace and a deeper relationship with Him.

Mentioned 146 times in Scripture, the number 40 generally symbolizes a period of testing, trial, or probation.

Moses lived 40 years in Egypt and 40 years in the desert before God selected him to lead his people out of slavery. Moses was also on Mount Sinai for 40 days and nights, on two separate occasions (Exodus 24:18, 34:1-28), receiving God’s laws. He also sent spies, for 40 days, to investigate the land God promised the Israelites as an inheritance (Numbers 13:25, 14:34). The prophet Jonah powerfully warned ancient Nineveh, for 40 days, that its destruction would come because of its many sins (Jonah 3:4).

Because of this, “by the solemn 40 days of Lent, the Church unites herself each year to the mystery of Jesus in the desert” (Catechism of the Catholic Church 540).

How is almsgiving associated with Lent? How can the faithful put this into practice?

Almsgiving is one of the three traditional practices of Lent: prayer, fasting, and works of mercy or almsgiving.

Almsgiving is contributing financially to those in need. Some parishes employ an “Offering Box” where the donation is given to assist the parish in their care for the poor. However, everyone has the ability to relieve the needs of those who are underprivileged through their local parish, diocese, shelters and soup kitchens. This can be done through a monetary or material contribution.

In his message for Lent 2022, Pope Francis encourages that “we practice almsgiving by giving joyfully” and reaching “out to our brothers and sisters who lie wounded along the path of life (cf. Lk 10:25-37)… To seek out – and not to avoid – those in need.” Almsgiving is yet another form of sacrifice, denying oneself as an expression of love for God and neighbor.

How is the season of Lent associated with preparing for baptism?

The Season of Lent has a twofold character: the baptismal and the penitential. The first purpose of Lent is that it is the final preparation period for the Catechumens who will be baptized at Easter and for the candidates who will be received into full Communion with the Catholic Church at Easter. For the baptized, Lent is our annual 40-day retreat when the Church summons us to conform ourselves more closely to Jesus through the ancient penitential practices of prayer, fasting, and almsgiving or works of mercy.

What are other ways the faithful can draw near to God during Lent?

The customary Lenten observances of prayer, fasting and works of mercy are the main path for drawing closer to God during Lent. In addition, celebration of the Sacrament of Reconciliation is highly recommended during Lent. Participation in daily Mass is a frequent Lenten practice for many, as well as praying the Stations of the Cross, the daily reading of Sacred Scripture, and performing works of mercy such as visiting the sick and caring for the homebound.

Why should the faithful make Lenten sacrifices?

The word “Lent” comes from the Old English, “Lenten” or “lencten” meaning the spring season or the lengthening of days. For the Christian, the Season of Lent is meant to be a time of spiritual renewal, a spiritual spring in which the soul is cleansed and renewed, allowing new life to bud forth. The sacrifices made during Lent make it possible for new life to blossom.

God’s Timing in Relationships: Couples of the Bible: Part III
Prayers for Lent