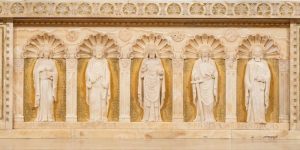 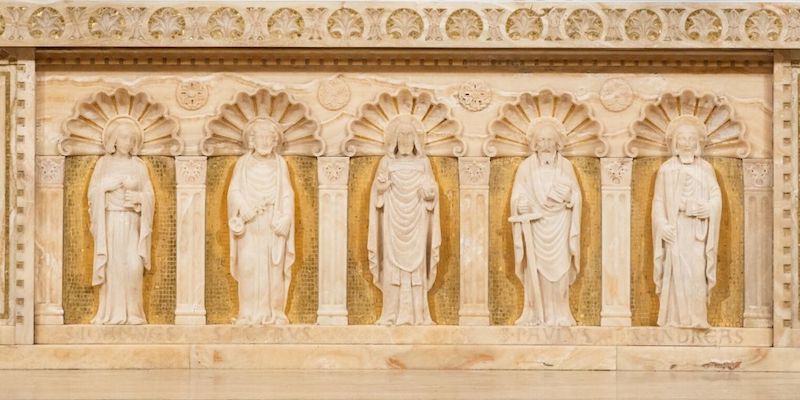 “As he was walking by the Sea of Galilee, he saw two brothers, Simon who is called Peter, and his brother Andrew, casting a net into the sea; they were fishermen. He said to them, “Come after me, and I will make you fishers of men.” At once they left their nets and followed him.”    – Matthew 4:18-20

On November 30, we observe the Feast of St. Andrew the Apostle, the first disciple to be called by Jesus. Though we know more about his brother Peter, it was Andrew who first met Jesus. One day, Andrew was with John the Baptist when they encountered Jesus, whom John proclaimed was “the Lamb of God.” After spending time with Jesus, Andrew went to tell Peter of his discovery.

Andrew, the brother of Simon Peter, was one of the two who heard John and followed Jesus. He first found his own brother Simon and told him, “We have found the Messiah” (which is translated Anointed). Then he brought him to Jesus. Jesus looked at him and said, “You are Simon the son of John; you will be called Cephas” (which is translated Peter).

As we see in Matthew’s account, there was no hesitation on Andrew’s part; he “immediately” followed Jesus, even leaving his father behind. One moment, the brothers were casting their nets for fish, the next, they were with Jesus sharing the gospel and performing miracles as “fishers of men.” Jesus commissioned Andrew with the other eleven apostles, equipping him to preach and heal in His name:

Jesus sent out these twelve after instructing them thus, “Do not go into pagan territory or enter a Samaritan town. Go rather to the lost sheep of the house of Israel. As you go, make this proclamation: ‘The kingdom of heaven is at hand.’ Cure the sick, raise the dead, cleanse lepers, drive out demons. Without cost you have received; without cost you are to give. (Matthew 10:5-8)

Andrew’s Role in the Miracle of Loaves and Fishes

In the well-known story of feeding the five thousand, it is Andrew who calls attention to the boy with the five loaves and two fishes, which Jesus uses to perform the miracle:

When Jesus raised his eyes and saw that a large crowd was coming to him, he said to Philip, “Where can we buy enough food for them to eat?” He said this to test him, because he himself knew what he was going to do. Philip answered him, “Two hundred days’ wages worth of food would not be enough for each of them to have a little [bit].” One of his disciples, Andrew, the brother of Simon Peter, said to him, “There is a boy here who has five barley loaves and two fish; but what good are these for so many?”. Then Jesus took the loaves, gave thanks, and distributed them to those who were reclining, and also as much of the fish as they wanted. (John 6:5-9,11)

“Go and Make Disciples of All Nations”

Andrew continued to be present throughout Christ’s ministry, and ultimately for the Last Supper and the Crucifixion. As the early church grew, Andrew went on to share the gospel in Scythia and Greece, fulfilling the Great Commission to “Go, therefore, and make disciples of all nations, baptizing them in the name of the Father, and of the Son, and of the holy Spirit…” (Matthew 28:19)

We can look to Andrew’s example of faithful discipleship as an inspiration in our own walk with Christ. May we not hesitate to follow him, share the truth of his gospel, and be willing to be used for his glory.

In the Basilica, Andrew is found in the West Buttress of the South Entrance, the Mary Memorial Altar, and the St. Anne Chapel.

In honor of this holy and venerable saint, we invite you to Light a Candle at the Basilica of the National Shrine of the Immaculate Conception. Vigil candles burn in the chapels throughout the Upper Church and Crypt level of the National Shrine. Each candle represents the faith of the supplicants and their fervent prayers entrusted to the loving intercession of the Blessed Mother.