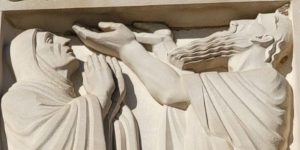 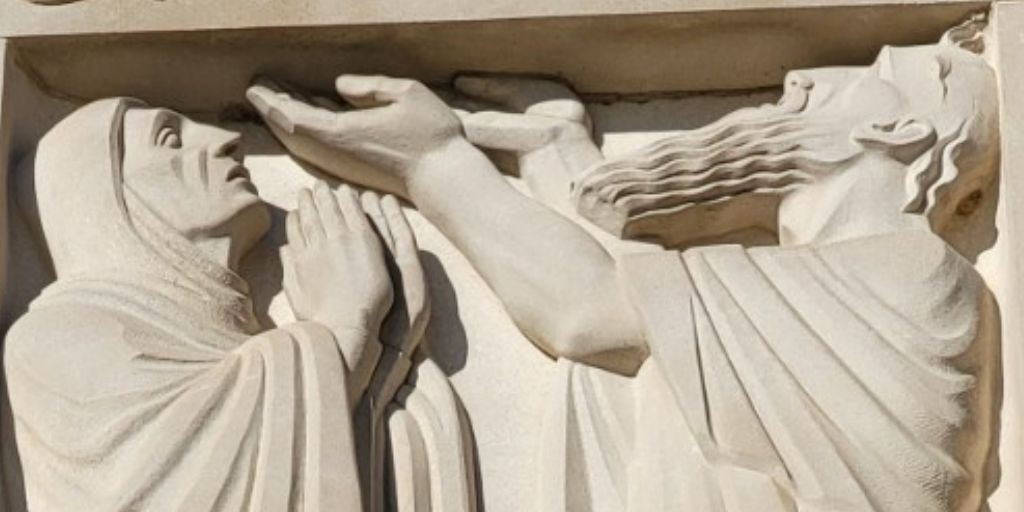 What does the Bible tell us about Anna? The Scriptures where she is mentioned are brief: Anna was present when Mary and Joseph brought Jesus to the temple at 40 days old, and watched as Simeon blessed Him. She lived a life of eager anticipation for Christ’s coming and testified to those in the temple about Him. Though the Bible doesn’t tell us much about her, it does reveal how her joyful witness was an enduring example of faithfulness.

In this post, we invite you to learn more about her life, legacy, and where you can find her portrayed in the Basilica.

Where is Anna Mentioned in the Bible?

Did you know that the apostle Luke has a tendency to emphasize the importance of women in the Gospel story? He includes more interactions of Jesus with women than the other Gospel writers — and one of these women is Anna. The passage in Luke 2:36-38 reads:

“There was also a prophetess, Anna, the daughter of Phanuel, of the tribe of Asher. She was advanced in years, having lived seven years with her husband after her marriage, and then as a widow until she was eighty-four. She never left the temple, but worshiped night and day with fasting and prayer. And coming forward at that very time, she gave thanks to God and spoke about the child to all who were awaiting the redemption of Jerusalem.”

Faith in the Goodness of God

Though Anna had a difficult life, she did not doubt God’s goodness. Luke tells us that Anna was a prophetess and had only been married for seven years before her husband died. As a widow in Jewish society, most likely without children, she had little way to provide for herself and most likely was dependent on the charity of others to survive. The Bible also indicates that she was from the tribe of Asher — a tribe that was taken into captivity in Babylon and did not return intact, so it was unlikely that she had an extended family network to rely on. But she didn’t let these struggles stop her from living in steadfast faith.

Anna was patient and persistent in her faith. Luke tells us that she was “advanced in age,” but she had not grown resentful or discouraged in her worship of God. Depending on the interpretation of the text, she was either 84 years old or had been a widow for 84 years — either way, she was elderly and had a difficult life. Yet, she was always at the temple, worshipping day and night, fasting, and praying.

What Does it Mean that Anna was a Prophetess?

Anna is one of only a handful of women designated as prophetesses in the Bible, including Miriam, Deborah, Huldah, Isaiah’s wife, and Philip’s daughters. So how did Anna fulfill that role? She was constant in her prayer and fasting, reminding others of the redemption that God had promised for Israel.

Anna had hope in what was to come, and God rewarded her steadfast faith by allowing her to see the Christ Child. She responded in joy and thanksgiving, telling everyone who was awaiting the redemption of Jerusalem, as Luke informs us. She recognized what many of the prominent Jewish leaders of the time could not see: that this little child, though He came as a humble servant, not as the conquering king that many looked for, was the promised Messiah who would save His people from their sins.

What You Should Know About the National Prayer Vigil for Life
Saints of the Trinity Dome: Pt II.