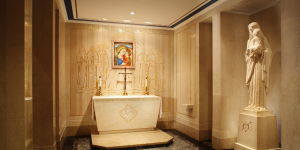 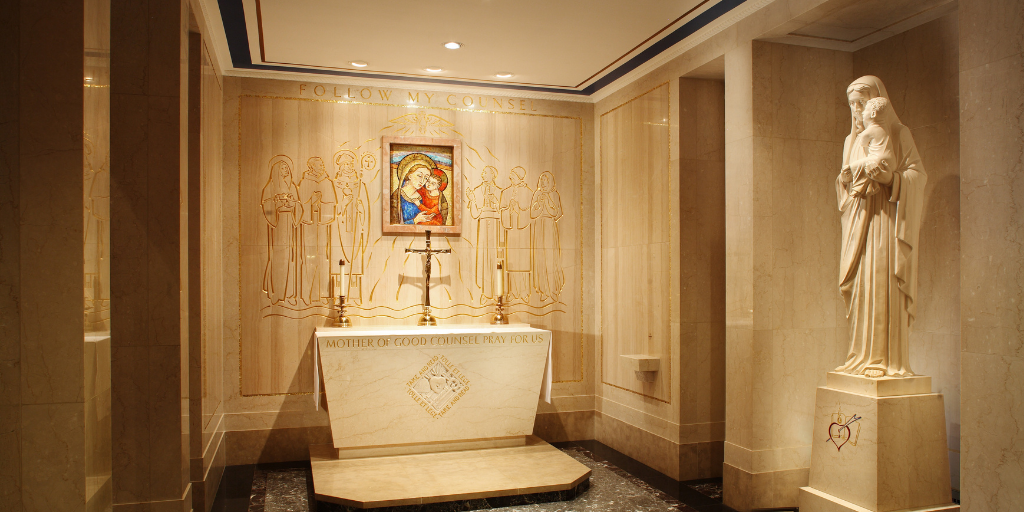 As we celebrate the dedication anniversary, we invite you to learn more about the origin of this Marian devotion and explore the chapel in immersive 360° with our virtual tour!

The Origin of Our Mother of Good Counsel

According to a centuries-old oral tradition, devotion to Our Lady of Good Counsel began during the Turkish offensive of 1467, when the sanctuary of the church of Scutari in Albania was reduced to ruins – except for one wall, where a fresco of the Madonna and Child had been. The fresco itself, however, disappeared.

That same year in a church in Genazanno, Italy, on the feast of Saint Mark, the faithful who were gathered there suddenly heard beautiful music coming from a luminous cloud above the tower of the church. The cloud then descended on the church, hovering above the wall of an unfinished chapel. Miraculously, the church bells began to ring and were soon joined by all the bells in the town. When the cloud disappeared, it revealed the image of the Madonna and Child on a paper-thin sheet of plaster.

The account holds that the fresco of Our Lady of Good Counsel had migrated from Scutari, escaping the invasion of the Turkish army. Despite its size and fragility, the fresco was able to stand upright. Tradition holds that the freestanding fresco remained upright in the church at Genazanno for many years, despite the great destruction suffered by other parts of the building during World War II.

This devotion was endorsed by Pope John Paul II during his visit to Genazanno on April 22, 1993.

Our Mother of Good Counsel in the Basilica

With our virtual tour, you can explore the chapel in immersive 360° – enjoy the panoramic views below!

Rejoicing in the Resurrection
10 Verses About God’s Mercy