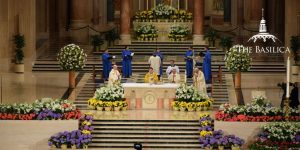 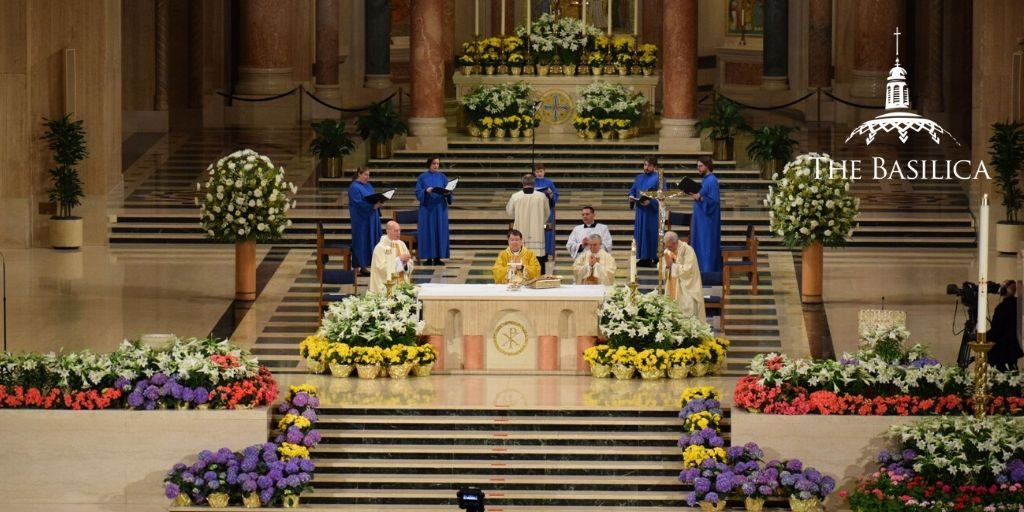 From the Basilica Music Department

As ashes were distributed and the haunting strains of Gregorio Allegri’s Miserere mei, Deus filled the cavernous Great Upper Church on February 26, few had even an inkling that just two weeks later, we would be at the dawn of unprecedented changes to our communal experience of the liturgy. The Third Sunday of Lent would be the end of public celebrations of the Mass, and by the Fourth Sunday, the Basilica was no longer open to the public. Behind the scenes, we in the music office were making plans for liturgies without an assembly, and even those plans continued to quickly evolve, as ever-tightening restrictions on the number of people gathering in the sanctuary rapidly reduced the number of musicians available to us.

Though we look forward to the music we sing and play throughout the year, the liturgical seasons of Advent-Christmas and Lent-Easter are especially meaningful to the musicians of the Basilica. There is an unforgettable feeling of excitement and festivity as the choir and orchestra traditionally rehearse on Holy Saturday morning while the Basilica is teeming with volunteers decorating every chapel and altar with lilies and other flowers. This year there was no orchestra on Holy Saturday and no brass quintet on Easter Sunday. The size of the choir has been reduced by over eighty percent. New repertoire planned and rehearsed for Lent and Easter had to be re-filed for future use. The effects of this new reality have been challenging, to say the least. As one popular meme states: “I honestly hadn’t planned on giving up quite this much for Lent.” Many now wonder what these weeks and months after Easter will hold.

However, new realities have presented new opportunities, and the musicians of the Choir of the Basilica have embraced them fully. Having vocalists in a much smaller ensemble, usually with one person on each vocal part, presents challenges not typically present when there are four or five people on each part. While it’s infeasible to present favorites such as Allegri’s Christus Resurgens and the Hallelujah Chorus from Handel’s Messiah with a smaller ensemble, it has created an opportunity to sing other repertoire suited to the smaller size of the ensemble, with greater expressivity. Polyphonic works by Jacquet de Berchem, William Byrd, and John Taverner were featured in this year’s Easter liturgies, along with new Psalm responses and a new motet for the offertory of the Easter Vigil by the Basilica Director of Music, Peter Latona.

We have chosen to focus on conveying the joy and hope which Easter brings in light of the current thoughts and fears occupying the minds of so many during this time. As a reflection of our human experience, the choral music has been more subdued, solemn and hopeful. The organ music, in contrast, has represented the hosts of heaven, the angel ministers, and the trumpet of salvation. Its power and majesty exult the Risen Lord with unending breath, causing this sacred space to shake with joy. Together, they express our praise of God who provides hope and consolation, and remind us of his constant presence and promise that the night will be as bright as day and full of gladness.

We are rightly reminded in the midst of this struggle with the coronavirus pandemic that the Mass has not stopped being celebrated, and its graces have not stopped flowing. It is an immense privilege to be able to continue to provide music for the celebration of the Mass and to be able to share that experience with people throughout the world. While we fervently pray for an end to the spread of the virus, the healing of those currently suffering its effects, and the repose of the souls it has claimed, we might best express our faith and hope in the words of the last verse of the Lenten hymn “Lord, Who throughout These Forty Days”:

Abide with us that, when this life
Of suffering is past,
An Easter of unending joy
We may attain at last.

Download the Spring/Summer Edition of Mary’s Shrine
Soli Deo Gloria: The Majestic Organs of the Basilica