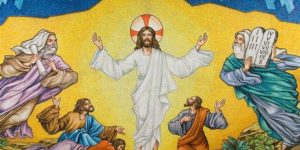 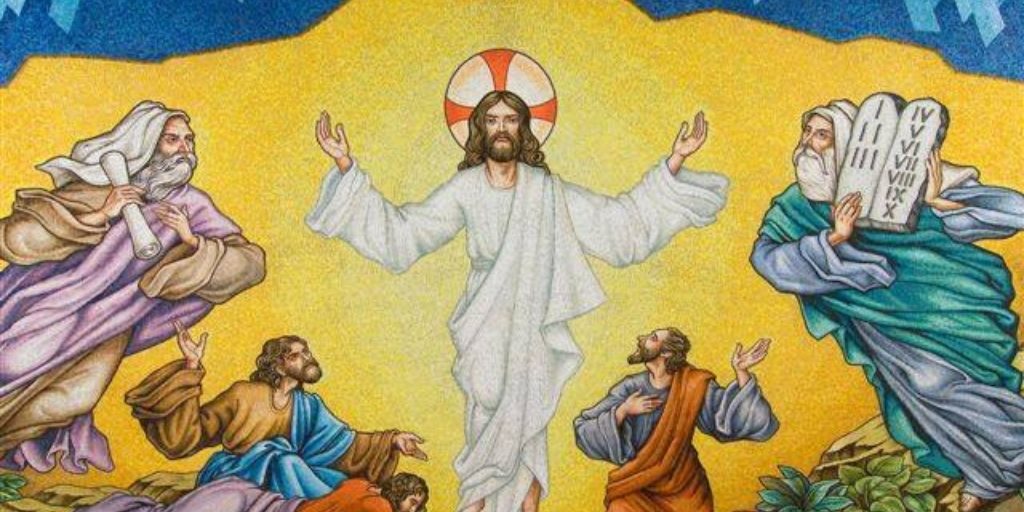 On August 6, we celebrate the Feast of the Transfiguration of the Lord. At the Basilica, the Transfiguration is depicted in the Rosary Walk and Garden, the Our Lady of Pompei Chapel, and the Incarnation Dome. This event is significant in Jesus’ life and ministry because it confirms his divinity and demonstrates how he fulfills the Old Testament scriptures.

After six days Jesus took Peter, James, and John and led them up a high mountain apart by themselves. And he was transfigured before them, and his clothes became dazzling white, such as no fuller on earth could bleach them. Then Elijah appeared to them along with Moses, and they were conversing with Jesus. Then Peter said to Jesus in reply, “Rabbi, it is good that we are here! Let us make three tents: one for you, one for Moses, and one for Elijah.” He hardly knew what to say, they were so terrified. Then a cloud came, casting a shadow over them; then from the cloud came a voice, “This is my beloved Son. Listen to him.” Suddenly, looking around, they no longer saw anyone but Jesus alone with them.

The presence of Moses and Elijah shows how Jesus fulfills the Law and the Prophets. In the Old Testament, the Levitical law was given to God’s people as a temporary administration, demonstrating their need for a Savior. Later, the prophets told of a coming Messiah, who would mend the rift between God and man that had been caused by sin. Jesus was the only man able to satisfy the Law, the perfect, sinless sacrifice.

Jesus Is the Glorious Son

In this passage God affirms Jesus as his Son, confirming his deity, and telling the disciples to listen to him. Peter, James, and John now see a glimpse of Jesus’ true glory: God the Son, who reigns eternal, and against whom the gates of hell shall not prevail. God the Father shows himself as he appeared to the Israelites of the Old Testament: in a cloud, because his glory is too great to be witnessed. That same glory is reflected on Jesus, whose clothes become dazzling white. This event emphasizes both the mystery and necessity of the Incarnation­—in order for man to be made right with God, God had to become a man, because we in our finite and sinful state are unable to behold his full glory.

Jesus Tells of His Coming Triumph over Death

This is also one of multiple instances in which Jesus points his disciples to his future resurrection:

As they were coming down from the mountain, he charged them not to relate what they had seen to anyone, except when the Son of Man had risen from the dead. So they kept the matter to themselves, questioning what rising from the dead meant. – Mark 9:9-10

Though the disciples do not understand his meaning, the Transfiguration and Jesus’ charge to the disciples present a promise of what is to come. There is hope, because he will soon triumph over sin and death, and be raised in the fullness of glory – the glory of which they have just been given a glimpse.

St. Lawrence and the True Treasure of the Church
Honoring Our Lady of China at the Basilica