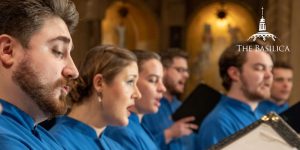 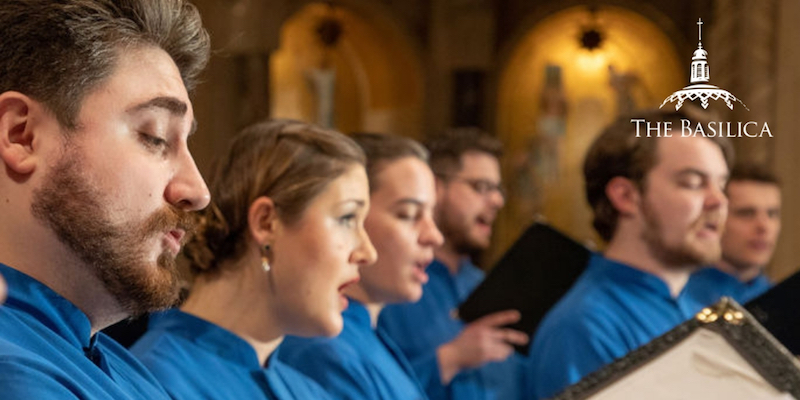 From the somber silence experienced at the beginning of the Good Friday Liturgy, to the thunderous organ fanfare and ringing of the bells at the Gloria on Holy Saturday, the music of Holy Week leads the faithful to more deeply experience the profound tenets of our faith revealed in the Paschal Mystery and celebrated during Holy Week.

Holy Week begins on Palm Sunday with the triumphant entry of Jesus into Jerusalem greeted by the crowd waving branches and shouting “hosanna,” which means “save now.” Though it begins with joy, we know that this journey will lead Christ to his death on the cross. The music sung at the offertory places the festive beginning of the liturgy in the context of Holy Week. The motet Christus factus est by Felice Anerio (c.1560 – 1614) sets the text of the Gospel verse:

Christ became obedient for us even to death on a cross.  Because of this, God highly exalted him, and bestowed upon him the name which is above every other name.

Anerio became a composer to the Papal Chapel in 1594, upon the death of Palestrina. This motet is his best-known work, notable for its use of dissonance and suspensions.

The motet is followed by the singing of the Passion Chorale, O Sacred Head Now Wounded. It combines a translation of a medieval passion poem with a very well-known German chorale tune by Hans Leo Hassler. The tune was harmonized repeatedly and to great effect by J.S. Bach, most notably in his St. Matthew Passion. He also set the tune with different words in the Christmas Oratorio, where it was used to foreshadow Christ’s death on the cross.

Holy Thursday is the commemoration of the Last Supper of Jesus Christ, establishing Holy Communion as his true body and blood and the institution of the priesthood. During the Last Supper, Jesus offers himself as the Passover sacrifice and teaches us to “love one another as I have loved you.”

Among the works sung during the choral prelude is Panis angelicus by Portuguese composer João Lourenço Rebelo (1610-1661), favored composer of King John IV and director of music at the Royal Chapel. His Panis angelicus, composed as the communion motet for Holy Thursday, is one of his few compositions to have survived a 1755 earthquake in Lisbon.  The composition is remarkable for its intricacy and rich texture, and is composed for seven voices in brilliant imitation, except for the moments when the text “o res mirabilis” (“what a marvelous thing”) is sung in by all voices in dynamic sonorities in unison rhythm.

During the Washing of the Feet, we reflect on the “new commandment” demonstrated by Jesus, who washed the feet of his disciples at the last supper and taught them to do the same. “I give you a new commandment, that you love one another, as I have loved you” is the refrain sung by the assembly in the Mandatum, composed by Basilica Director of Music Peter Latona. This composition was inspired by Pope Francis who, on his first Holy Thursday as pontiff, washed the feet of twelve inmates at Casa del Marmo prison in Rome.

Good Friday commemorates the crucifixion of Jesus Christ on Calvary. The solemnness of this day is marked by the absence of sound from organs, bells, or other instruments. The music focuses sharply on the suffering and death of Christ, the profound significance of the cross on which he died, and by whose holy sacrifice we have been redeemed. On this day, the faithful adore the cross by genuflection, songs, and a kiss. Music for the Good Friday Liturgy includes:

Were You There?, an African-American spiritual originally sung by slaves in the 19th century. Although it is impossible to know exactly when it was written, it was first published in 1899. In 1940, it became the first spiritual published in a major American hymnal. Its text asks us if we were present at the crucifixion of Christ and functions in much the same way as the invitation to witness and relive the Paschal mystery in the Eucharistic prayers during Mass.

Salvator mundi, by Thomas Tallis (c.1505-1585) was performed for the courts of Henry VIII, Edward VI, Mary I and Elizabeth I. Tallis remained a Roman Catholic during the religious controversies of his time. “Savior of the world, save us, thou who by thy cross and blood has redeemed us.”

The Adoramus te, Christe (We adore you, Christ) text is usually sung or recited during Stations of the Cross. Its composer, Giovanni Maria Nanino (c.1543-1607), was a renowned Roman musician and teacher. He succeeded Palestrina as maestro di cappella at San Luigi de’ Francesi in Rome and was also a member of the papal choir. He taught many future composers, including Felice Anerio and Gregorio Allegri.

Miserere mei by Gregorio Allegri (1582-1652) is sung during the choral prelude on Good Friday. Allegri was a priest and composer. He composed this, his most famous work, during the reign of Pope Urban VIII for use during the Holy Wednesday and Good Friday Tenebrae services. It was forbidden to transcribe the music and for some time was only allowed to be sung at the Sistine Chapel. According to legend, a 14-year-old Mozart heard it sung there and transcribed it from memory, leading to its publication in London in the 1770s.

At the Easter Vigil, the church eagerly awaits the Resurrection of the Lord in a Liturgy of utmost richness and meaning. The liturgy progresses through four parts, focusing first on light, then word, baptism, and eucharist.

The Troparia on Lumen Christi (Light of Christ), composed by former Basilica Director of Music, Leo Nestor, are sung as the Paschal candle is carried in procession and the church is gradually brought from darkness to light. Among the psalms sung during the Liturgy of the Word is Psalm 15, You are my inheritance, O Lord, composed by Peter Latona. The Liturgy of Baptism is marked by the singing of Vidi aquam (I saw water water flowing from the Temple, alleluia). Sung during the Liturgy of the Eucharist and scored for orchestra and choir in a powerful and dynamic setting by Associate Director of Music, Benjamin LaPrairie, is the communion antiphon, Christ Our Passover.

At the conclusion of the communion procession and sung as a hymn of thanksgiving is the Hallelujah Chorus from Messiah (1741) by Georg Friedrich Händel (1685-1759). Now one of the most famous choral works in existence, it uses text from the book of Revelation to end the section of the oratorio about Christ’s Passion and usher in the section celebrating his resurrection.

Reflecting on the Seven Last Words of Christ
Statement by Monsignor Walter R. Rossi, Rector of the Basilica, Regarding the Notre Dame Cathedral Fire