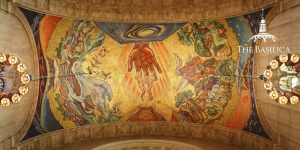 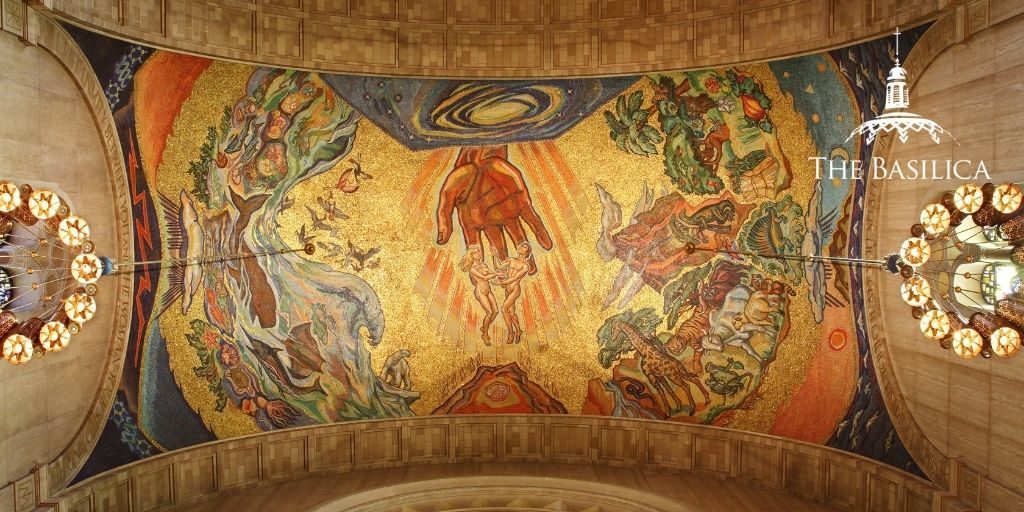 In November of 1973, the twin mosaics The Creation and The Second Coming were dedicated. Hours upon hours of work went into the design and installation of these majestic works of art that grace the east and west transepts of the Great Upper Church. Designed by artist Mary Reardon and installed by Ravenna Mosaic company, these were the first mosaics that employed a computer to measure the size and number of the flat tiles that would fit into the curved ceiling. The two mosaics serve as bookends to the Great Upper Church, depicting the beginning and the end of the earth.

The Creation mosaic of the east transept is a colorful portrayal of the six days of creation. The focal point of the mosaic is God’s hand, giving life to Adam and Eve. Underneath them, an embryo represents the generations that are to come.

These symbols of humanity are surrounded by various elements of the landscape – plants, waves, clouds, and a volcano – as well as sea creatures, birds, and various wild animals, livestock, and dinosaurs as described in Genesis 1:24-25:

The far left shows the division of day and night, while the far right depicts the sun and moon. The left pendentives of the mosaic incorporate a double helix design of DNA, demonstrating the compatibility of science and creation. Artist Mary Reardon worked for three years researching and creating the design, consulting biologists and wildlife experts.

The Creation mosaic is a vibrant, tangible depiction of God’s mighty hand in forming all of the physical world that we know and experience.

The Second Coming mosaic of the west transept is inspired by Christ’s coming as described in Mark 13:26-27:

“And then they will see ‘the Son of Man coming in the clouds’ with great power and glory, and then he will send out the angels and gather [his] elect from the four winds, from the end of the earth to the end of the sky.”

An 18-foot figure of Christ stands with outstretched arms. People in distorted shades of blue and green, with heads turned from Christ, signify those who have rejected him. On the right, Mary leads prominent saints such as John, Peter, Paul, Teresa of Avila, Thomas More, Maria Goretti, and Pope Pius X, while on the left, St. Stephen leads the unknown saints, represented by a soldier, modern business man, a Native American woman, a colonial American man, a frontier woman and her child, a friar, and a laborer.

This majestic mosaic serves as a reminder of the hope that we have in Christ, who has conquered death and will one day return to establish the new heaven and earth.

From the Army to the Basilica: An Interview with Walter Robinson, Security Guard
In Paradisum: Music for All Saints and All Souls