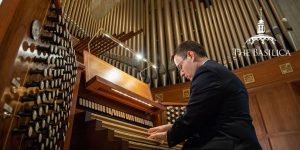 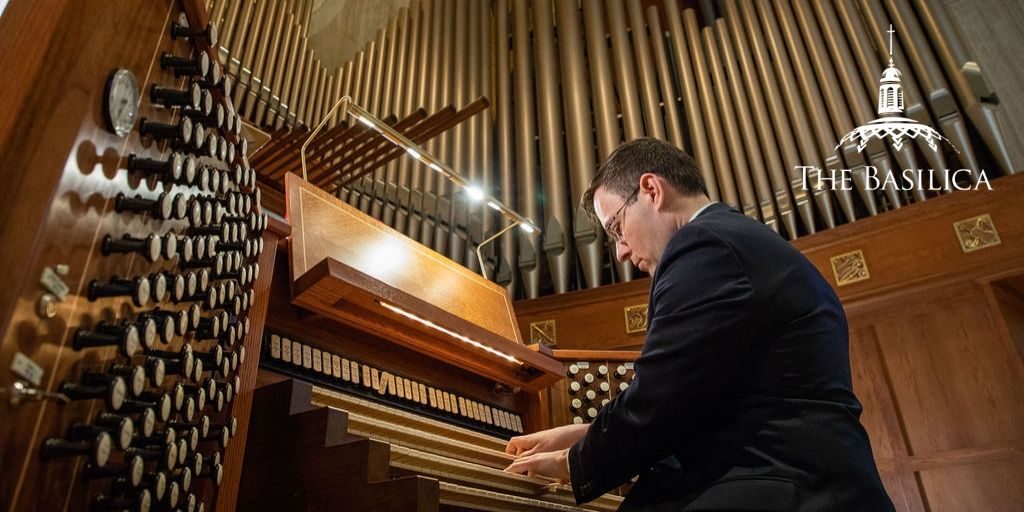 For almost a century, the magnificent sound of the pipe organ has filled the sanctuaries of the Basilica. From the first instrument played in the Crypt Church in 1927, to the dedication of the monumental instruments in the galleries of the Great Upper Church in 1965, pilgrims continue to experience the organ’s unparalleled sonic expressiveness and power. It is the primary accompaniment of the hymns, psalms, and acclamations sung during liturgies at the Basilica.  Concerts and recitals provide a special opportunity to hear even more of the vast capabilities and repertoire of the pipe organ. 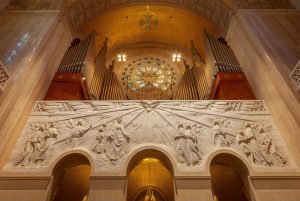 Since Marcel Dupré first performed in the Crypt Church in 1937, an illustrious group of organists have performed at the Basilica, including Maurice and Marie-Madeleine Duruflé, Jean Langlais, Marilyn Mason, Olivier Messiaen, Virgil Fox, Daniel Roth, Frederick Swann, and Olivier Latry. Most recently, the Basilica was honored to welcome Johann Vexo – choir organist of Notre Dame de Paris – to perform a benefit concert in April 2019, following the tragic cathedral fire.

The pipe organ is the world’s first keyboard instrument, attributed to Greek inventor and mathematician Ctesibius of Alexandria in 300 B.C. By A.D. 900, its increasing use in various royal chapels throughout Europe firmly established its connection with the liturgy and the development of western sacred music. Called the “King of Instruments,” the pipe organ surpasses all others in its ability to sustain sound indefinitely (considered an attribute of the Divine). Its range of sound is also unmatched, from the lowest to highest frequencies and the softest to loudest dynamics. These characteristics are further enhanced by the spacious acoustics of the churches and cathedrals where the organs are typically installed. 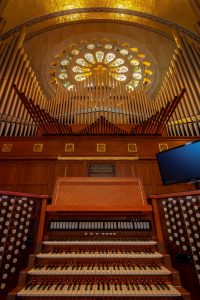 The immense marble and stone-clad interior of the Basilica works in unique harmony with its pipe organs, producing marvelous effects most fully appreciated in person. Comprised of 9,393 pipes, the Great Upper Church organs are the second largest in Washington, D.C. The tallest pipe stands over 38 feet high and weighs close to 900 pounds, and the heraldic Pontifical Trumpet remains one of the few all-bronze ranks in the world.

In the late 1970s, the Basilica created an annual summer organ recital series to showcase its acclaimed pipe organs. Since then, distinguished organists from around the world have performed on Sunday evenings in the months of July and August. This season we welcome programs by performers hailing from locations as near as Charlottesville, Virginia, and as distant as Bondues, France, including: Ted Davis, Jérôme Faucher, Emmanuel Duperrey, Damin Spritzer, and Jeremy Thompson. The Basilica’s own organists – Peter Latona, Benjamin LaPrairie, and Andrew Vu – will also be performing. All recitals start at 6:00 PM in the Great Upper Church and admission is free. Prior to each recital, Robert Grogan, Basilica Carillonneur and Organist Emeritus, will perform on the Knights’ Tower Carillon at 5:30 PM. We hope that you will join us for a respite from the summer heat and an opportunity to hear glorious music in an extraordinary sacred space.

Recital Details
Testaments to Loving Care: Our Lady of La Vang & Our Lady of Guadalupe
The Remarkable History of America’s Catholic Church