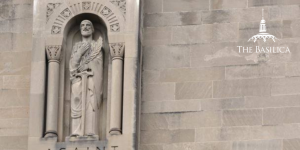 On June 1, the Church celebrates the Memorial of St. Justin Martyr, an eminent philosopher and apologist for the faith. Though he ultimately lost his life in defense of Christianity, his bravery continues to stand as a testimony to the faithful today. In this post, we invite you to learn more about his story and discover where he is portrayed in the Basilica.

The son of immigrants, Justin was born in Samaria sometime around the second century. Though Justin’s father taught him the pagan Greek religions, he also provided him with a solid educational foundation, and Justin developed a passion for philosophy, motivated by the desire to know truth. In this pursuit, he visited several educational institutions, but found them all wanting: the scholars were plagued by arrogance and had no faith in God. How could such men hope to know Him? It wasn’t until Justin read Plato that he began to see what he was missing; he told Justin to study the Jewish prophets, saying:

“Above all things, pray that the gates of life may be opened to you, for these are not things to be discerned, unless God and Christ grant to a man the knowledge of them.”

Justin later wrote of his experience in his Apologies:

“When I was a disciple of Plato, hearing the accusations made against the Christians and seeing them intrepid in the face of death and of all that men fear, I said to myself that it was impossible that they should be living in evil and in the love of pleasure.”

This marked the beginning of Justin’s intellectual and spiritual journey to Christianity – and at age 30, he was baptized. But he did not cast off all things associated with his heritage, continuing to dress in the traditional Greek philosopher’s cloak. He remained a bachelor until his death, and taught others about the Catholic faith, becoming a rigorous apologist for Christianity against paganism and secular philosophy. In particular, Justin is known for his Apologies and Dialogue with Tryphon, and his efforts to convince Roman officials of the disadvantages of persecuting Christians. Justin is also one of the earliest scholars to have given a cohesive framework for how the Church’s beliefs inform the practice of Liturgy.

The Death of Justin Martyr

Justin’s outspoken defense of Christianity and stance on persecution would eventually cost him his life. Though his letter to Emperor Antonius Pius in 150 was successful in staving off persecution, Christians faced it again under Emperor Marcus Aurelius in 167. When Justin wrote to Aurelius criticizing this persecution, he was seized and presented to the prefect of Rome, Rusticus. Rusticus interrogated Justin and told him that if only he denied his faith and followed the pagan gods and the edicts of the emperor, his life could be spared. But Justin held fast in his faith – and for that he was scourged and put to death alongside six companions in the faith.

Today, he is remembered not only for his keen philosophical mind and work as an apologist, but for his unflinching bravery in the face of torment and death. He is portrayed in the east façade of the Basilica.

“We are slain with the sword, but we increase and multiply; the more we are persecuted and destroyed, the more are deaf to our numbers. As a vine, by being pruned and cut close, shoots forth new suckers, and bears a greater abundance of fruit; so is it with us.” – St. Justin Martyr

Virtually Tour the Chapel of Mary, Help of Christians
Saints of the North Apse: Guardians of the Poor and Underprivileged