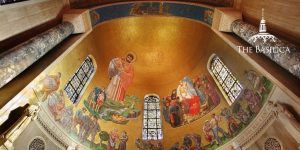 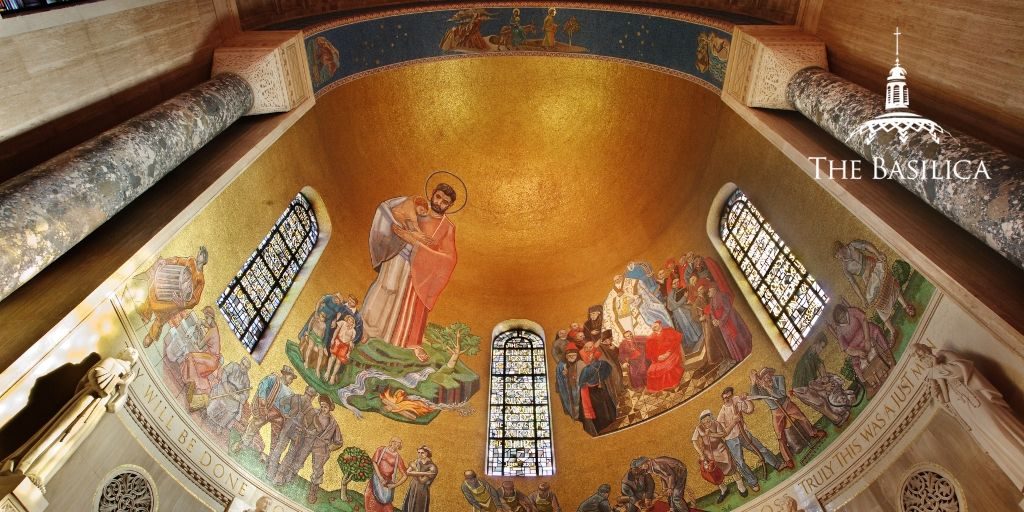 March 19 is the Feast of St. Joseph, the earthly father of Jesus and the patron of the Universal Church. Though Joseph is only mentioned a few times in the Bible, the gospel accounts, especially Matthew’s Gospel, demonstrate his upright character and strength as the leader of his family. St. Joseph can be found in mosaics, stained glass, and sculptures throughout the Basilica.

A Righteous and Obedient Man

Matthew 1:19 describes Joseph as a “righteous man.” When he learned that Mary was pregnant, he did not want to shame her by calling attention to her situation. Instead, he was going to break off their engagement quietly.

Joseph was obedient to the Lord. When the Lord spoke to him through an angel, he immediately set aside his plan to break off their engagement, and instead, married her as the Lord commanded.

The angel of the Lord appeared to him in a dream and said, “Joseph, son of David, do not be afraid to take Mary your wife into your home. For it is through the holy Spirit that this child has been conceived in her. She will bear a son and you are to name him Jesus, because he will save his people from their sins.”

Joseph played an important part in Jesus’ early life, serving as a strong earthly father and protecting Jesus and Mary. We see his care and protection demonstrated in the account of the flight into Egypt:

When they returned from Egypt, Joseph worked as a carpenter to provide for his family. Matthew 13:55 mentions this, as many were surprised at Jesus’ teaching:

Is he not the carpenter’s son? Is not his mother named Mary and his brothers James, Joseph, Simon, and Judas?

Joseph became the guardian, the administrator, and the legal defender of the divine house whose chief he was. And during the whole course of his life he fulfilled those charges and those duties. He set himself to protect with a mighty love and a daily solicitude his spouse and the Divine Infant; regularly by his work he earned what was necessary for the one and the other for nourishment and clothing; he guarded from death the Child threatened by a monarch’s jealousy, and found for Him a refuge; in the miseries of the journey and in the bitternesses of exile he was ever the companion, the assistance, and the upholder of the Virgin and of Jesus.

St. Joseph at the Basilica

Saint Joseph is the patron of the Universal Church, and we are urged to seek his paternal intercession for our own necessities. We would be honored to pray for your intentions.
Saint Joseph, Spouse of the Blessed Virgin Mary, Pray for us!

Hope Amidst the Challenge of Coronavirus: A Reflection from the Rector of the Basilica
Basilica Adds Livestream of Devotions Following Livestream of Noon Mass for the Remaining Sundays of Lent