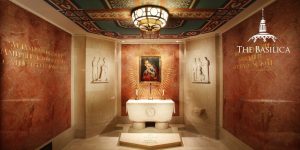 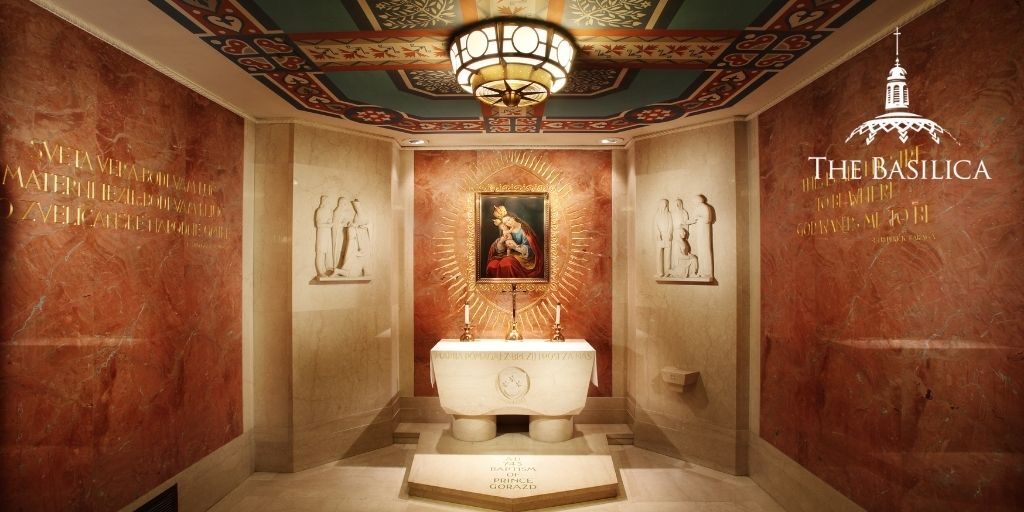 January 1 is the Solemnity of Mary, Mother of God, which honors Mary’s role as the Mother of the Savior. As the Mother of Christ, Mary played an integral role in the story of redemption. Mary’s attitude was one of unhesitating obedience as she accepted the role God ordained for her in bringing the Savior into the world and raising him. In honor of this Solemnity, we’re taking you on a virtual tour of the Basilica art that honors Mary as the Mother of God.

The Mother of God Depicted in Art

Art depicting Mary as the Mother of God usually falls into two categories: the Hodegetria – “she who shows the way” or “the guide”; and the Eleousa – “the one who shows mercy” or the “tender touch.” The Hodegetria depicts Mary holding the Christ Child while pointing towards Him with her right hand. As Mary presents her son, the source of salvation, to the world, the Child raises His right hand, symbolizing Jesus’s divine authority to bless and to teach. The Eleousa is the more intimate of the two, showing Mary cheek to cheek with the Christ Child, a moment of tenderness between mother and son. Jesus focuses His attention on His mother, embracing her.

Our Lady of Bistrica

In the Basilica, Our Lady of Bistrica is carved in white marble, holding the Christ Child while standing on the head of Satan. She is surrounded by seven mosaic rondels portraying significant Croatian Catholics.

Our Mother of Africa

The Our Mother of Africa Chapel focuses on a bronze sculpture of the Blessed Mother holding the Christ Child, an example of Mary as Hodegetria. He points toward the narrative relief of the African American experience from slavery to emancipation. The chapel stands in remembrance of the painful history of slavery in the United States and the pillar of hope which Our Lady represented to the many victims of this tragedy.

Bronze reliefs of the four apostles grace the walls, while the ceiling is covered in mahogany paneling to echo the feeling of being in the hull of a slave ship. An ebony figure of Jesus, carved by Tanzanian artist Juvenal Kaliki, is on a cherrywood cross in the other corner of the chapel.

Our Lady of Brezje

The original painting of Our Lady of Brezje, also known as Mary, Help of Christians, was completed in 1814 by artist Leopold Layer and resides in the Church of St. Vitus in Brezje, Slovenia. Miracles have been attributed to Mary under this title as patroness of Slovenia. The chapel in the Basilica features a copy of the original oil painting, with the infant Jesus reaching up and touching Mary’s face. Both wear ornate gold crowns, crafted by goldsmith Alojz Źmuc. Four marble reliefs depict the baptism of the Slovenian Prince Gorazd, Bishops Slomšek and Baraga, and Slovenian immigrants to the U.S.

Our Lady of Pompei

On May 8, 1876, the cornerstone was laid for a shrine dedicated to Our Lady of the Rosary in Pompei. The church was built as a result of the efforts of an Italian man named Bartolo Longo, who was a convert to Catholicism and sought to encourage devotion to the Blessed Mother.

Our Mother of Good Counsel

On the Feast of St. Mark in 1467, a cloud descended upon the ruins of a fifth-century church in Genazzano, Italy. Upon its disappearance, the people of the village discovered a small picture of the Madonna and Child on a thin sheet of plaster. The miraculous image remained delicately balanced on a ledge in the church for years, even surviving a bombing during World War II, and came to be known as Our Mother of Good Counsel.

At the beginning of this new year, we entrust to the Blessed Virgin Mary all of the intentions held deep within our hearts. It would be our honor to present your prayers to the great Mother of God by lighting a candle at the Basilica of the National Shrine of the Immaculate Conception in Washington, D.C.

We turn to Mary, the Mother of the Prince of Peace, asking her to obtain every grace and blessing for you during this new year through Jesus Christ, her Son.