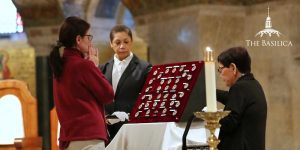 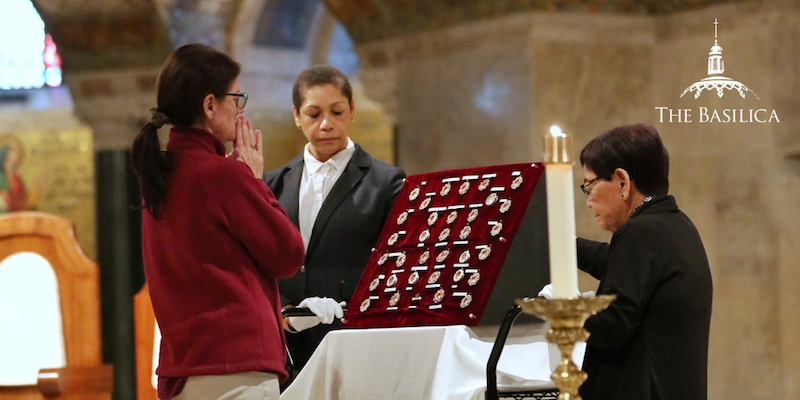 The relics of the passion, death, and burial of Our Lord Jesus Christ are the first relics of the Church and remain its most precious. Did you know that “relic” is from the Latin reliquiae meaning “remains” or “remnants”? In the Early Church, the veneration of these relics was central to the observance of Holy Week. At the Basilica of the National Shrine of the Immaculate Conception, this venerable tradition continues.

The Basilica continues this tradition with the Exposition of the Relics of the Passion of Our Lord Jesus Christ. The Basilica’s collection of relics available for veneration on Good Friday includes:

Also displayed are relics of Mary, the Mother of Jesus, her sister, Mary, wife of Clopas, Mary of Magdala, the Twelve Apostles, and Saint Paul.

A Look at Three Relics:

Particles from the Scourging Pillar

According to early Christian sources, the scourging pillar was taken to the Church of the Apostles atop Mount Sion after the destruction of Jerusalem by the Romans in A.D. 70. Today, a portion believed to be of that same pillar is housed in a chapel in one of the oldest churches in Rome, Santa Prassede (Praxedes). It was brought to the church from Constantinople in 1223. During the Middle Ages, there was such a devotion to this relic that the Holy See established a “Feast of the Holy Pillar” on the Fourth Sunday in Lent. The iron hoop, to which it is believed Jesus was tied, was donated to King Louis IX of France in 1240 in exchange for three spines from the Crown of Thorns.

Although the crown of thorns is often depicted as a circular band or wreath, it was most likely a type of cap covering the entire head, a theory that is supported by the studies of the Shroud of Turin. The crown believed to have been worn by Jesus is preserved in the Cathedral of Notre Dame, Paris. In the early days of the National Shrine, Bishop Shahan had received a reliquary that contained spines from the crown of thorns. Unfortunately, the reliquary is gone, but its contents have been maintained at the National Shrine.

John is the only evangelist to include the detail: “one of the soldiers pierced His side with a spear, and immediately blood and water came out” (19: 34).

Tradition tells us that the lance was discovered inside the Holy Sepulchre along with other relics. Nothing was written about this relic until the mid-6th century, when the pilgrim Antoninus of Piacenza recorded in his pilgrimage diary that he saw “in the Basilica of Mount Sion [in Jerusalem] … the lance with which [Jesus] was struck in the side.”

Since 1492 the complete lance has been under the dome of Saint Peter’s in one of the four piers facing the main altar, guarded by Bernini’s sculpture of (Saint) Longinus, opposite the pier with the relic of the True Cross.

Learn more about the other relics at the Basilica.

The Exposition will take place in the Crypt Church of the Basilica on Good Friday, April 19, from 7 a.m. to 6 p.m., except during the noon hour, at which time the faithful will participate in Stations of the Cross.

Exposition of the Relics of the Passion of Our Lord Jesus Christ is free and open to the public – no tickets or reservations are required. Please join us in observing Holy Week through the veneration of these holy relics.

Statement by Monsignor Walter R. Rossi, Rector of the Basilica, Regarding the Notre Dame Cathedral Fire
A Moment in Basilica History: First Mass Celebrated in the Crypt Church 95 Years Ago