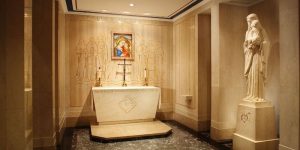 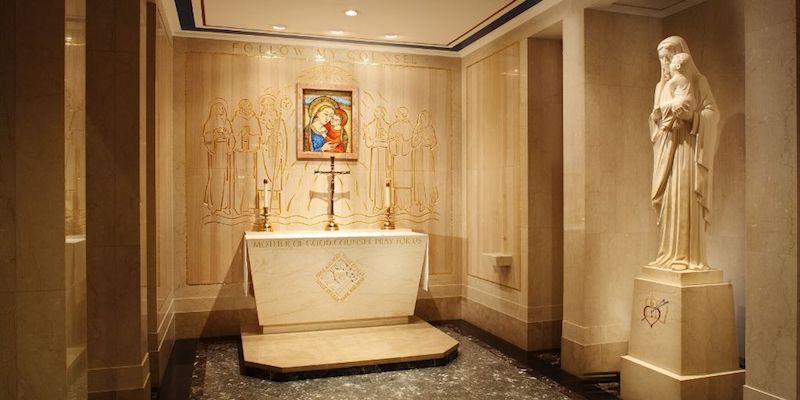 The Origin of Our Mother of Good Counsel

According to a centuries-old oral tradition, devotion to Our Lady of Good Counsel began in Scutari, Albania. It was endorsed by Pope John Paul II during his visit to Genazanno, Italy on April 22, 1993: “From Scutari comes the image of Our Lady of Good Counsel here venerated.” This pious tradition states that during the Turkish offensive of 1467, the sanctuary of the church of Scutari was reduced to ruins. On the remaining wall once adorned with the fresco of Our Lady of Good Counsel, there was now only an empty space the size of the fresco, which had disappeared. That same year in Genazanno, Italy, on the feast of Saint Mark, during Vespers honoring the city’s patron saint, the faithful suddenly heard beautiful music coming from a luminous cloud situated above the tower of the church. The cloud then descended on the church of the Mother of Good Counsel, hovering above the wall of an unfinished chapel. Miraculously, the bells of the church began to ring and were soon joined by all the bells in the town. When the cloud disappeared, it revealed the image of the Madonna and Child on a paper-thin sheet of plaster. Miraculously, the fresco of Our Lady of Good Counsel had migrated from Scutari, escaping the invasion of the Turkish army. Despite its size and fragility, the fresco was able to stand upright. Tradition holds that the freestanding fresco remained upright in the church at Genazanno for many years, despite the great destruction suffered by other parts of the building during World War II.

Our Mother of Good Counsel in the Basilica

Prayer to Our Mother of Good Counsel

The chapel at the Basilica contains the following prayer:

We turn to you, Our Mother of Good Counsel, as we seek to imitate your faith-filled life.
May we be led by the same Wisdom which God sent forth from heaven
to guide you along unfamiliar paths and through challenging decisions.
Keep us united in mind and heart as we go forward in joyful hope
toward the grace-filled freedom that Augustine recommends.
O Virgin Mother of Good Counsel, hear our prayer as we look to you for guidance.
Pray for us to our loving and merciful Father, and to your Son, our Lord Jesus Christ,
and to the Holy Spirit, giver of all wisdom, one God, for ever and ever. Amen.