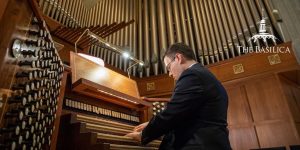 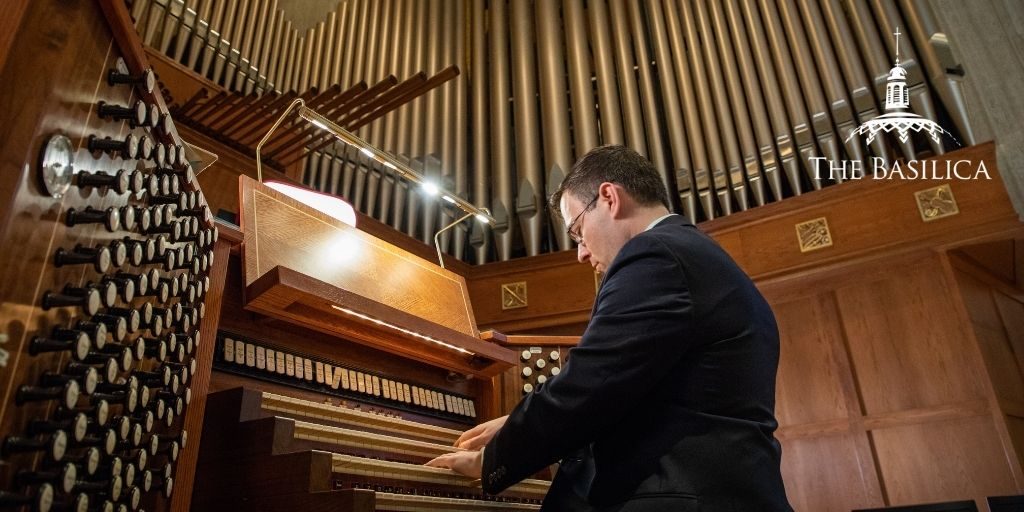 This summer, the organists of the Basilica have produced a collection of videos showcasing the majestic instruments and talented musicians of America’s Catholic Church. With a diverse repertoire spanning the centuries, from Bach’s Toccata in C Major to an original Sortie Improvisation by our own Andrew Vu, these pieces offer a taste of the divine.

Basilica organist and Associate Director of Music Ben LaPrairie joins us on the blog today to share about the inspiration and history of the selection – we hope you enjoy listening to these magnificent recordings and learning more about the music.

In composing the Suite Française, Langlais sought to offer a fresh interpretation of the 18th century organ style of Couperin, Clérambault, and Dumage via a modern harmonic language. The Nazard, like other movements in the suite, is named for the particular tonal color of the organ it utilizes. Cavaille-Coll’s magnificent organ at the basilica of Sainte-Clotilde in Paris possessed a wealth of timbres and inspired Langlais to compose the suite shortly after he was appointed organiste titulaire in 1945.

Renowned for his improvisations as well as his work as organist and choirmaster of Saint Thomas Church Fifth Avenue (1971-2004), Gerre Hancock greatly influenced the study and performance of sacred music in America over the turn of the century. Basilica Director of Music Dr. Peter Latona studied improvisation with him while pursuing a master’s degree at Yale University. Composed in 1960 and dedicated to his wife Judith, Air demonstrates the great color and dynamic range of the organ, featuring many of the solo stops as well as a dramatic crescendo and decrescendo toward the end of the work.

Gladys Jameson taught music at Berea College in Kentucky, where Basilica Director of Music Dr. Peter Latona would later teach, and where he first heard this piece. It is a setting of tunes from The Sacred Harp, a shape-note hymn collection from 1844. Jameson is particularly remembered for collecting and publishing an anthology of ballads, hymns, and folksongs from the Appalachian region.

Composed between 1710 and 1717 while Bach worked in Weimar, the Toccata in C Major is a great synthesis of the North German prelude and Italian concerto forms. Just a few years before, Bach made the 280-mile walk from Arnstadt to Lübeck to study with Dietrich Buxtehude, one of the foremost organists of the day. It is likely not coincidental that the famous pedal solo in the Toccata in C Major has an archetype in Buxtehude’s own Prelude in C Major, BuxWV 137. Similarly, Antonio Vivaldi’s influence is evident throughout in the insistent, driving rhythm and the distinctive themes.

Mulet was the son of the maître de chapelle at the Basilique du Sacré-Coeur in Paris, and quickly rose in prominence as an organist and cellist at the Paris Conservatoire. He composed the Carillon-Sortie in 1911-1912, and dedicated it to Joseph Bonnet, one of the leading virtuoso organists of the day and founder of the organ department at the Eastman School of Music. The Carillon-Sortie exuberantly imitates the sonic experience of ringing bells through the popular and improvisatory carillon-toccata form of the day.

Sortie-Improvisation is a toccata-like gigue that is composed of three distinct sections. The rhythmic opening is followed by a lyrical section that features fragments of the Salve Regina Mode I chant tossed around the hands and feet. This middle section then expands and drives into the last section, combining both the opening rhythmic motif and the chant.

Learn More about Sacred Music at the Basilica 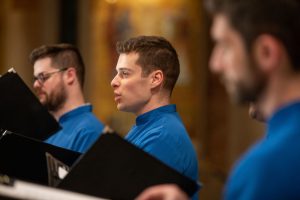 The musicians of the Basilica strive to be agents of spiritual transformation by creating music that is artistic, genuine, authentic, purposeful, and evangelizing. Learn more about Sacred Music at the Basilica.