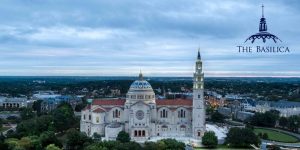 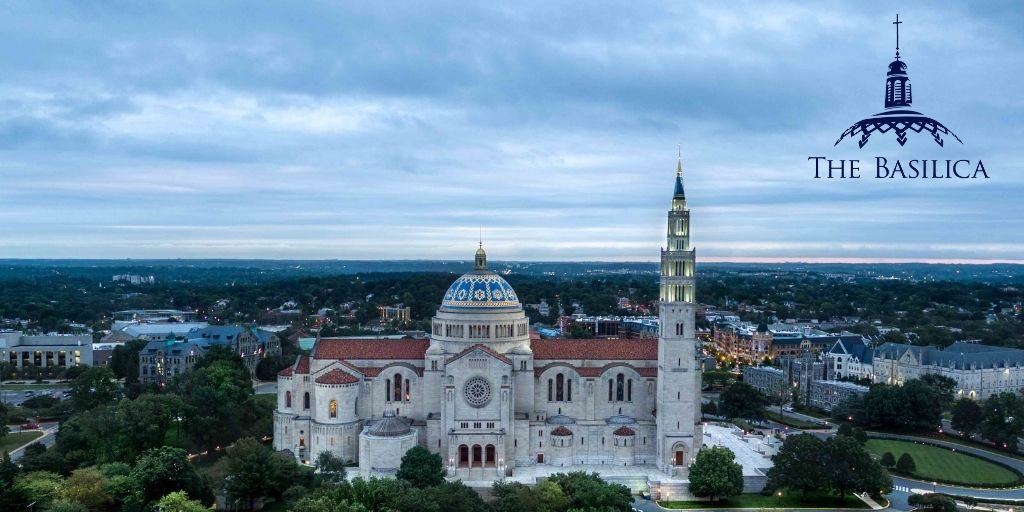 Piercing the heavens at an awe-inspiring height of 329 feet, the Knights Tower is rivaled in the Capitol only by the Washington Monument. It is also home to the Basilica’s 56-bell carillon, which has rung out during pivotal moments in the life of America’s Catholic Church, from the solemn remembrance of 9/11 to the jubilant arrival of Pope Francis in 2015. As we celebrate the 58th anniversary of the installation of the Knights Tower Carillon on July 23, we offer an inside look into this beloved feature of the Basilica.

History of the Knights Tower Carillon

Although the bell tower – also known as the campanile – was originally designed to stand on the southeast corner in 1920, plans were revised to put it in the northeast corner in 1926 and in the southwest corner in 1928, where it stands today. Height restrictions on structures in the District of Columbia meant that an exemption had to be requested to build the tower.

In 1957, the National Shrine received sufficient funds to build the campanile thanks to the generosity of Supreme Knight Mr. Luke E. Hart. Although the tower was dedicated in 1959, it was not until 1963 that the bells were installed, thanks to a gift made by the Knights of Columbus for the purchase of the carillon. On the day of the dedication, Archbishop O’Boyle expressed his gratitude in these words:

“. . . to the members of the Knights of Columbus, in the name of the bishops of the country, I say we are deeply grateful for this wonderful gift. Long after we are gone, this tower and these bells will be paying honor to God and to his Mother.”

The 56 bells of the carillon cover a range of two octaves and vary in weight from 21 lbs. to 7200 lbs. Altogether, they weigh 37,150 pounds! Each bell is named for a saint and inscribed with text written in the voice of the namesake – a longstanding tradition with carillon bells. The largest bell, the Mary bell, carries the following text:

Mary is my name.
Mary is my sound.
Beloved Mother
Queen of Heaven and Earth
Queen of this dear land
for knights to God and country bound
and all who hear my voice
I sing the praises of God.

The Mary bell strikes on the hour; the Christopher, Edward, Francis and Virgil bells strike on the quarter hours.

Did you know that the original Shrine Carillonneur, Dr. Robert B. Grogan, still performs weekly recitals after Mass every Sunday? Since he began as carillonneur in 1964, he has delighted listeners with his unmatched technical prowess on this unique instrument.

When asked if there is something people may not know about the carillon, Dr. Grogan shared:

Since the carillonneur is invisible to the public, except in some ground-level installations, most people probably imagine that playing the carillon is similar to playing the piano or organ, whereas in actuality it is much more physical: the keys are more widely-spaced and are struck by the outside edges of the closed fists (manual keyboard) and by the feet (pedalboard). The action is completely mechanical, with no electrical assistance, so the performer provides all the “power” needed to transmit the downward motion of the keys through the action to the bell clappers, which vary in weight according to the size of the bell. Thus, one works harder to play the heavier bass bells than for the lighter trebles – this is not the case with the piano or organ!… And, playing the carillon is very good exercise!

Because the Shrine campanile was designed for a precision musical instrument, it has no observation platform and no public access. The two bell chambers are located at the levels of 172 ft. and 223 ft, and the cabin of the carillonneur is located between the two tiers at 200 ft. To reach the cabin, the carillonneur must climb a spiral staircase of 208 steps!

The music of the carillon

The harmonics of bells are decidedly not the same as they are for strings and wind instruments. While most instruments have major-third harmonics, there is a minor-third in bell harmonics, so the major triads sounded out-of-tune… While some music – especially chordal music in major keys – is not going to sound well on bells, original music for carillon and well-transcribed music for other instruments can be quite musically effective.

The bells from the Knights Tower call the faithful to prayer and announce significant events in the life of the Church. The bells are rung each hour, prior to Mass, and at the Angelus. Visitors can also listen to carillon recitals each Sunday at 2:30 pm while walking around the grounds of the Basilica. You can see and hear the glorious bells of the carillon in the videos below.

Get to know the bells from the Knights Tower that play such an important role in the life of the Church.

Download carillon specifications
The God Who Hears: The Story of St. Lazarus
3 Prayers for Grandparents