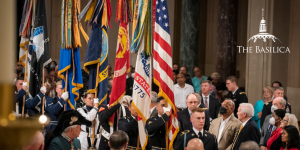 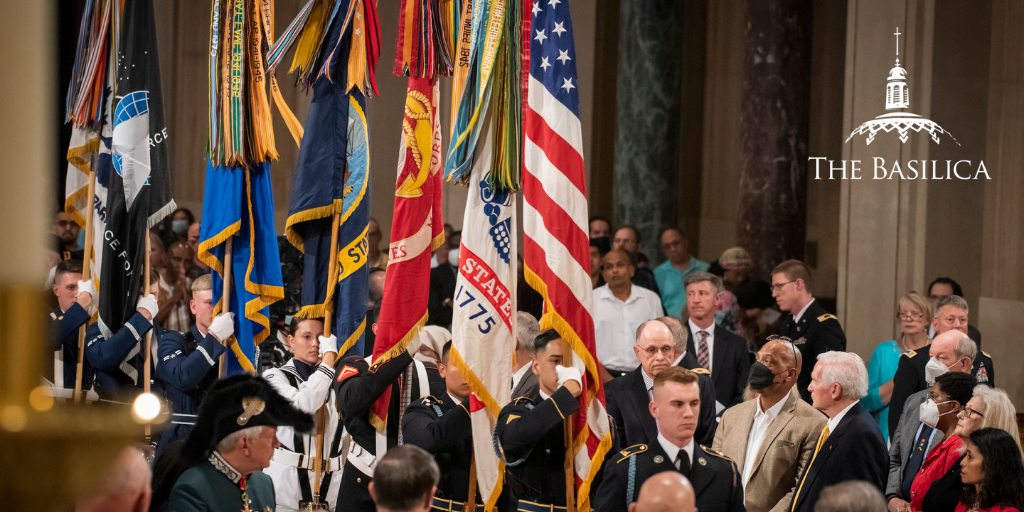 Commemorated to honor all those who died in military service for the United States, Memorial Day reminds us of the beauty of self-sacrifice, particularly in laying down one’s life for the sake of others. The Archdiocese for the Military Services, USA hosted its annual Pilgrimage and Memorial Mass on May 22, remembering all those who have died in service to our country over the last year, including military chaplains.

Mass began with an honor guard of the Knights of Columbus, the posting of colors with representatives from every branch of the U.S. Armed Forces, and the singing of the National Anthem. In his homily, Most Rev. Timothy P. Broglio, Archbishop of the Military Services, USA, honored “all… who sacrifice, or have sacrificed daily, to protect the freedoms we hold dear” and reflected on the role that the military plays in protecting our religious freedoms:

“Ultimately, the pilgrimage of human life has heaven as its goal. We are all gifted to open ourselves to heaven, and to help others on our journey through this life that passes away.

The men and women that we honor today gave the best of what they had and who they are in order to offer us security, tranquility, and the ability to pursue our pilgrimage, enjoying the freedoms that we hold dear.”

The Archbishop noted that the ultimate goal of the men and women in the military is not continued conflict – but the achievement of peace:

“The international military pilgrimage this year had as its theme: Dona nobis pacem. Give us peace.

In a Europe where war rages, that elusive gift seems so much more to be desired. Pope Francis reminded the military: ‘You are called not only to prevent, manage, and put an end to conflicts, but also to contribute to the construction of an order based on truth, justice, love, and freedom’…

We recognize that authentic peace is much more than the absence of violence or the situation of a cold war – the dimension of Biblical justice is also a part of peace. That indicates being in a right or balanced relationship in a four-fold way: with God, with self, with others, and with the created world.”

He then called upon the faithful to pray for those in the United States Armed Forces and their families:

“So we gather to pray for the repose of the souls of the priests who have served in the armed forces… We remember all of those service men and women who have died either in battle from wounds, or after the normal journey of life. We pray for their loved ones – many left behind and seeking consolation and understanding. We include all of those intentions sent to the archdiocese for this occasion.

Not far from our prayers are also those who still carry in their hearts and bodies the wounds of war. Many came home, but with a spirit overwhelmed with the burdens of experience… We continue our prayers for them and our commitment to their healing.

With this perfect prayer, we express our deep and abiding gratitude to all of those who have served and serve. This opportunity is precious – because giving thanks is important. Commitment is honored, and we pray that it might be imitated in future generations.”

The full Memorial Mass celebrated at the Basilica is broadcast on EWTN on Memorial Day, Monday, May 30 at 12:00 p.m. ET. Please tune in to reflect on the meaning of love and sacrifice, and to honor the men and women in the United States military who paid the ultimate price.

Saints of the North Apse: Guardians of the Poor and Underprivileged
What the Holy Fathers tell us about the Visitation