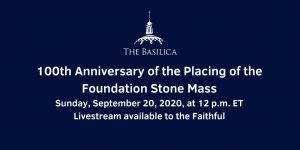 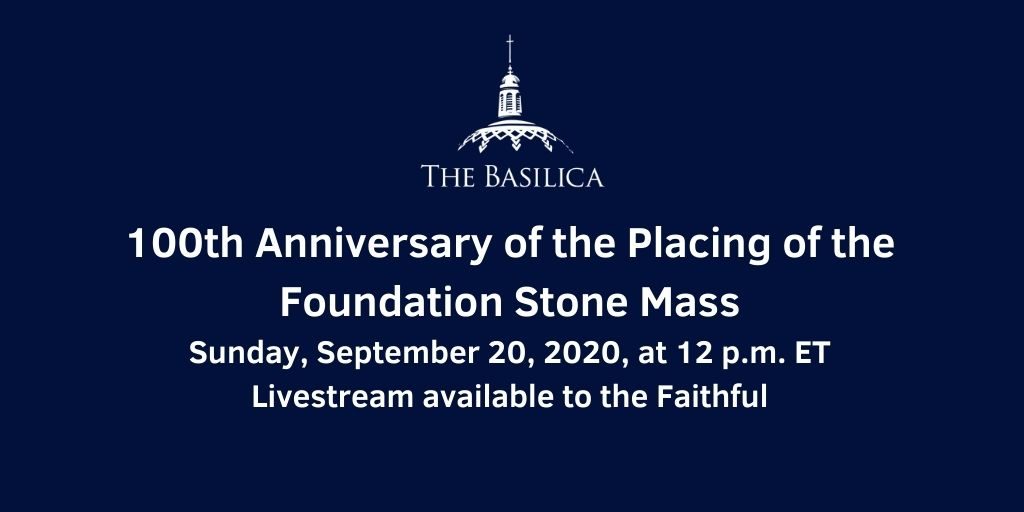 The Basilica of the National Shrine of the Immaculate Conception will inaugurate a year-long celebration of the centennial of the placing of its foundation stone on September 20, 2020, the Sunday closest to the actual 100th anniversary on September 23, 2020.

The Most Reverend Wilton D. Gregory, Archbishop of Washington and Chairman of the National Shrine’s Board of Trustees, will be the principal celebrant and homilist of the 12 noon Mass on September 20 in the Basilica’s Great Upper Church.

Due to COVID-19 restrictions, this 100th Anniversary Mass will be limited to 100 persons on a first-come, first-served basis. However, the Mass commemorating this historic milestone will be widely broadcast on Catholic television and radio networks nationally and internationally. The Basilica will also livestream the Mass on its YouTube channel, Facebook page, as well as its website at www.nationalshrine.org/Mass.

Pope Francis, who visited the National Shrine on September 23, 2015, the 95th Anniversary of the placing of the foundation stone, has granted a plenary indulgence, under the usual conditions, for the Centennial Jubilee beginning September 20, 2020, through September 23, 2021.

A grander celebration of the centennial is anticipated for the closing of the Jubilee Year of the placing of the foundation stone on September 23, 2021, when hopefully the nation and world will have overcome the coronavirus pandemic.