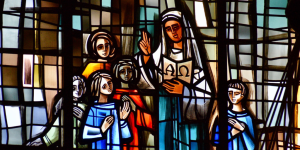 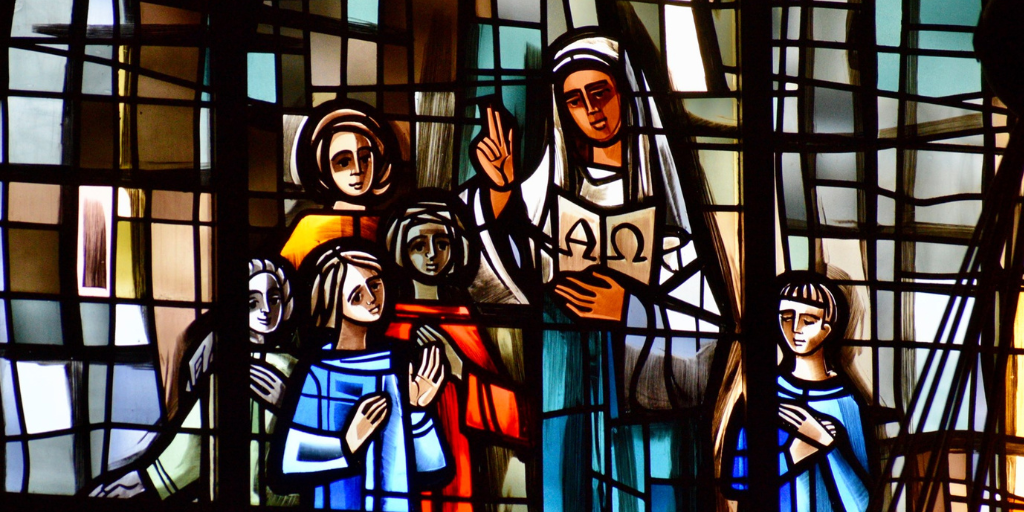 Celebrated on January 27, St. Angela Merici is the founder of the Order of St. Ursula. Throughout her lifetime, she worked tirelessly to educate poor and underprivileged young women – and today, the Ursulines continue that vital work in over 30 countries around the world. Learn more about St. Angela’s life, faith, and where you can find her in the Basilica in this post.

Born in Desenzano, Italy in 1474, Angela Merici was sent to live with her uncle at a young age following the death of her parents. Years later, she felt the sting of loss once more when her sister passed away. Seeking a new life amidst her grief, she joined the Third Order of St. Francis, taking a vow of virginity and dedicating herself to Christ.

It wasn’t until Angela ventured back home, however, that she saw the first glimmer of the great purpose God had in store for her. When she returned to Desenzano at age 20, she was struck by the aimlessness of so many of the young women there. Few had received an education, and many struggled to find purpose. Their plight weighed on Angela’s heart, and she soon realized she needed to act. She began a variety of educational initiatives, first by opening her own home and then founding schools in Desenzano and Brescia.

At age 50, while travelling abroad, Angela experienced the power of God in ways unlike ever before. In 1524, she was on a pilgrimage to the Holy Land when she inexplicably lost her vision in Crete. Undeterred, she continued her journeys, visiting all the sacred places. On her way home, she stopped in Crete once again and the unthinkable happened: her vision was restored. Angela knew that this could not be some happy chance – God’s hand was in this miracle to teach her a lesson. Angela believed He wanted to remind her not to shut her eyes to the needs of those around her.

The Company of St. Ursula

The next year, Angela traveled to Rome to gain the plenary indulgence offered to pilgrims for the Jubilee year. Pope Clement VII invited her to stay in Rome, but she declined in order to continue her humble way of life.

Once again, God’s hand was in her plans.

Instead, she returned home in November 1535 and created a teaching order under the patronage of St. Ursula, beginning with twelve young women. Called Angela’s Company of Saint Ursula, or the Ursulines, it was a “secular institute” — a group of women consecrated to Christ, but living in the world as opposed to a monastery. It was also the first teaching order of women in the Church. Though the members of the organization wore no formal habit or took vows, they held to a “Rule of Life” written by Angela that included a pledge to celibacy, poverty, and obedience. 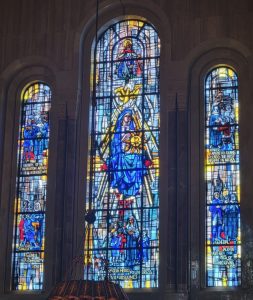 Throughout all the Ursulines pursuits, Angela’s goal was to improve the lives of families through the education of future wives and mothers. She was known to say, “Disorder in society is the result of disorder in the family.” The order opened both schools and orphanages to carry out its mission, and was later officially approved by Pope Paul III. Through her efforts, many young women were educated and equipped to have better lives.

Before her death, Angela said to her sisters: “I shall continue to be more alive than I was in this life, and I shall see you better and shall love more the good deeds which I shall see you doing continually, and I shall be able to help you more.” She died on January 27, 1540, and was canonized by Pope Pius VII in 1807. Today, the Company of St. Ursula continues Angela’s mission of education, with members in 30 countries around the world.

Angela is portrayed in the Basilica in the southwest nave clerestory window and is known as the patron saint of educators, the disabled, and those grieving the loss of parents.