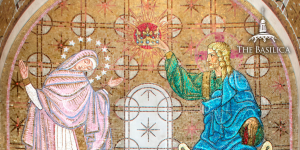 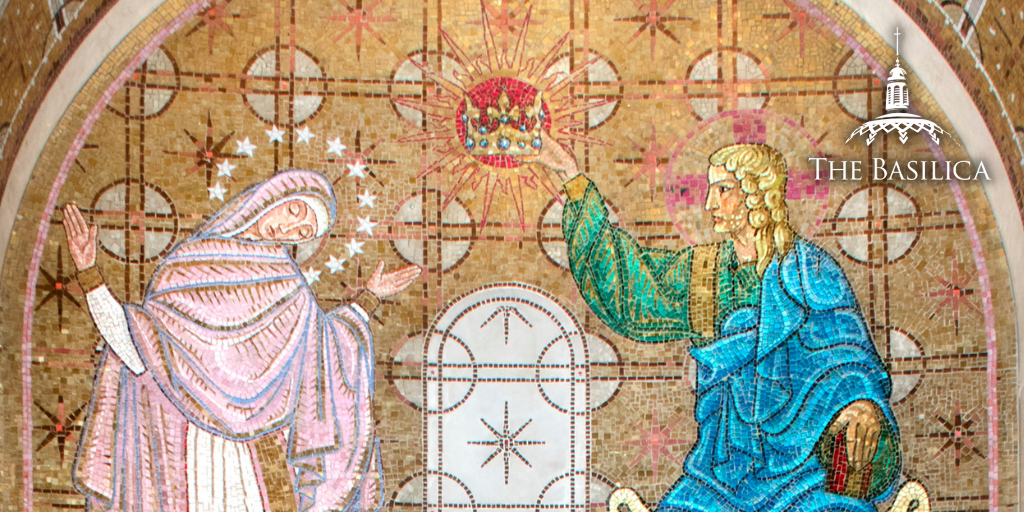 Did you know that the Church celebrates the Queenship of the Blessed Virgin Mary on August 22 each year? As we observe this Memorial on the octave day of the Assumption, we invite you to learn more about Mary’s royalty and virtually tour the Coronation Chapel, where the crowning of Mary as Queen of Heaven and Earth is honored at the Basilica in a shimmering gold mosaic.

About the Memorial of the Queenship of Mary 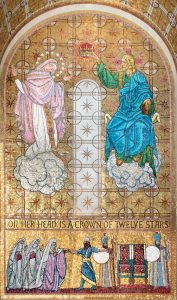 The Memorial of the Queenship of Mary was first instituted in 1954 by Pope Pius XII. Catholic tradition holds that because Christ is King of the Universe, serving as a merciful ruler and “Lord of lords,” (1 Timothy 6:15), Mary is Queen of Heaven and Earth as Mother of the King. Pope Benedict XVI described this relationship, saying:

“The small and simple young girl of Nazareth became Queen of the world! This is one of the marvels that reveal God’s Heart. Of course, Mary’s queenship is totally relative to Christ’s kingship. He is the Lord whom after the humiliation of death on the Cross the Father exalted above any other creature in Heaven and on earth and under the earth (cf. Phil 2: 9-11). Through a design of grace, the Immaculate Mother was fully associated with the mystery of the Son: in his Incarnation; in his earthly life, at first hidden at Nazareth and then manifested in the messianic ministry; in his Passion and death; and finally, in the glory of his Resurrection and Ascension into Heaven.”

Mary’s Coronation Depicted in the Basilica

Mary’s Coronation is portrayed in the Basilica in mosaic tile in the Rosary Walk and Garden, as well as the Coronation Chapel in the Great Upper Church. In the Coronation Chapel, Jesus is depicted as the King of Kings, honoring his mother Mary by seating her on a throne next to him and giving her a heavenly crown. Encircling her head are the twelve stars which symbolize the twelve tribes of Israel. Beneath the depiction of Mary and Jesus is the Old Testament parallel to Mary’s Coronation: Bathsheba, the Queen Mother, receiving honor from her son, King Solomon, as he seats her next to him on his throne (1 King 2:19). The two panels are joined by the text from Revelation: “On her head is a crown of twelve stars” (12:1).

Virtually explore the Coronation Chapel below and enjoy immersive panoramic views of this breathtaking space.

In honor of Mary, Queen of Heaven and Earth, we invite you to light a candle today at the National Shrine. Vigil candles burn in the chapels throughout the Great Upper Church and lower crypt level of the National Shrine. Each candle represents the faith of the supplicants and their fervent prayers entrusted to the loving intercession of the Blessed Mother.

Light a candle
Virtually Tour the Our Mother of Africa Chapel
Who was the first Christian king of Hungary?