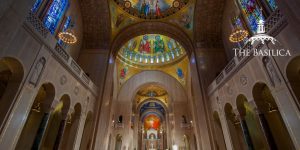 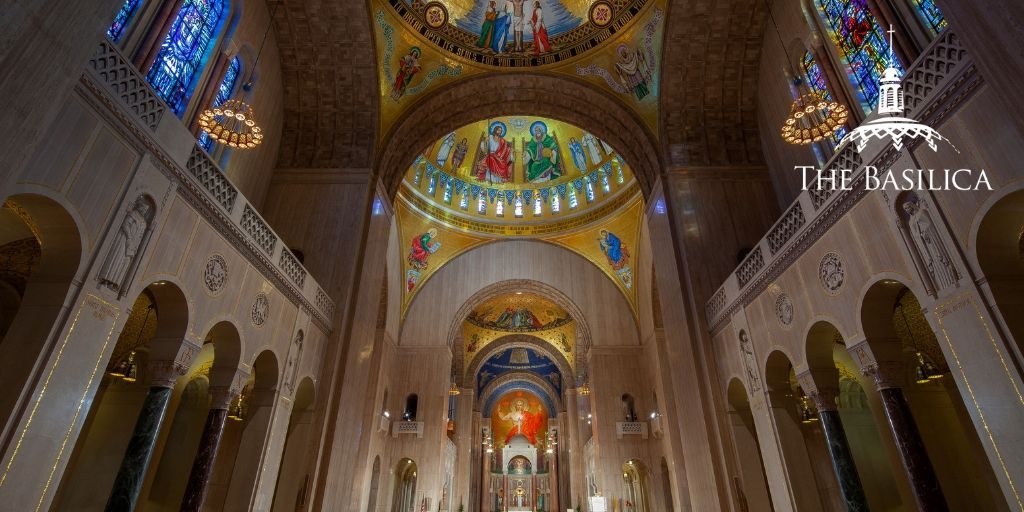 The Feast of the Most Holy Trinity is approaching – a special day dedicated to reflecting upon the sacred beauty of our Triune God. The wonder of this divine mystery is portrayed in the Basilica’s Trinity Dome, one of the Basilica’s five domes which each tell a unique story of scriptural truths.

As in St. Mark’s in Venice, the chief characteristics of the interior of the Shrine are a succession of decorated domes. Each dome is a unit in itself, leading to the last half dome of the apse of the church, the Christ in Majesty.

Although each dome is different, the Trinity Dome unifies all five into a coherent storyline ending with the Christ in Majesty mosaic in the North Apse. Upon looking closely at the theme of each dome, it becomes apparent that they form a timeline of the New Testament.

First, the Incarnation Dome depicts the moment at which Christ entered this world and was made manifest. The Redemption Dome depicts the story of how Christ redeemed us through his death and resurrection. The Trinity Dome encompasses the great mystery of our faith, the Most Holy Trinity, with the Blessed Virgin Mary, angels and saints, encircled by the Nicene Creed. The Sanctification Dome portrays the Descent of the Holy Spirit, when the apostles were given the grace and courage to go out and preach the Gospel to the ends of the earth. The Glorification Dome depicts the prophecies of the end times, the Triumph of the Lamb. This dome naturally leads to Christ in Majesty, the mosaic of Christ in all his glory as he will appear at the end of our world. 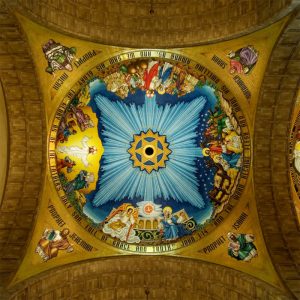 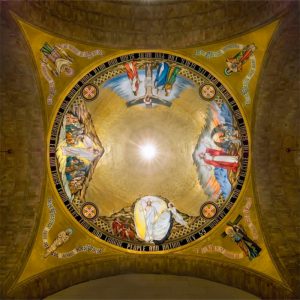 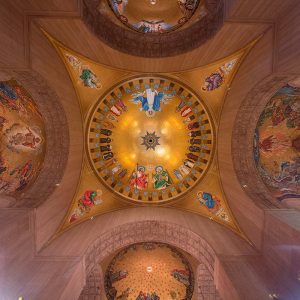 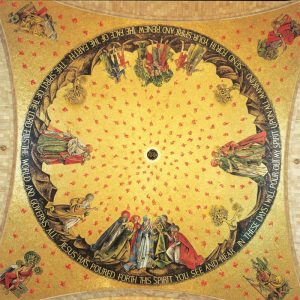 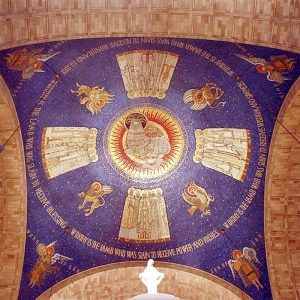 The Glorification of the Lamb Dome

What is the ultimate purpose of these domes? To summarize in the words of Pope John Paul II in Article 12 of his ‘Letter to Artists’:

In order to communicate the message entrusted to her by Christ, the Church needs art. Art must make perceptible, and as far as possible attractive, the world of the spirit, of the invisible, of God. It must therefore translate into meaningful terms that which is in itself ineffable. Art has a unique capacity to take one or other facet of the message and translate it into colors, shapes and sounds which nourish the intuition of those who look or listen. It does so without emptying the message itself of its transcendent value and its aura of mystery.

Why do nearly one million people visit the Basilica each year?
The Trinity Dome and the Feast of the Blessed Trinity