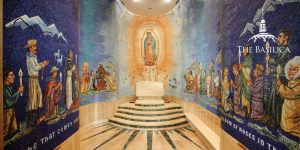 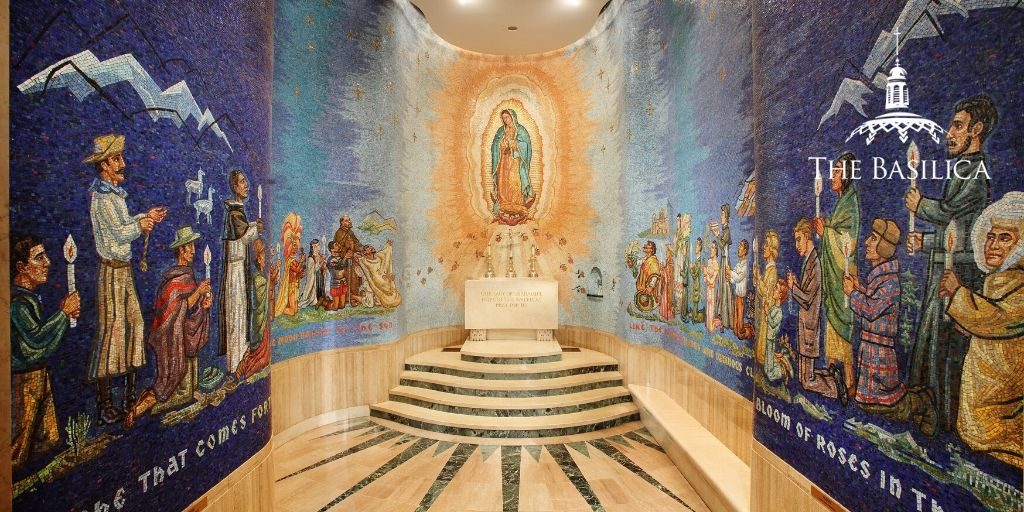 “Who is she that comes forth like the rising dawn
fair as the moon
bright as the sun
like the rainbow gleaming amid luminous clouds
like a blossom of roses in the spring.”

– Inscription on the Chapel of Our Lady of Guadalupe, adapted from Song of Solomon

How did the tradition of Our Lady of Guadalupe originate?

On December 9, 1531, a baptized Náhuatl Indian named Juan Diego was on his way home from Mass when the Virgin Mary appeared to him on Tepeyac Hill, on the outskirts of Mexico City. She asked him to build a church upon the spot. When Juan Diego asked the Virgin her name, she replied in his Nahuatl tongue “Tlecuatlecupe,” which is pronounced similarly to Guadalupe and means “the one who crushes the head of the serpent.”

According to Mary’s instructions, Juan Diego brought the request to the local bishop, but he refused it. A few days later, on December 12, Juan Diego returned to the bishop with his tilma of coarse-woven cactus fiber, filled with roses he had gathered at the apparition site. When he opened his cloak, the flowers fell to the ground, revealing a miraculous image of the Blessed Mother. This is the only “self-portrait” given by the Blessed Mother, and it is the only apparition in which she is “with child,” signified by the band above her waist. For this reason, she is the Patroness of the Unborn.

The Chapel of Our Lady of Guadalupe

The Chapel of Our Lady of Guadalupe in the Basilica is lined with curving walls intended to mimic the experience of the apparition. The mosaic figures to the left and right are the people of the North, Central, and South Americas, carrying lighted candles in procession to the Virgin Mary.

The Chapel of Our Lady of Guadalupe also carries the history of the people of Latin America, when they called upon the Blessed Mother under this title during periods of oppression. From 1926-29, an uprising against the anti-Catholic government was fought in Mexico. The battle cry of the Cristeros was ¡Viva la Virgen de Guadalupe! During this time, the National Shrine began invocations to the Virgin of Guadalupe on the John Carroll altar in the former National Shrine “Art Museum.”

Cardinal Cushing, the donor of this chapel, like the other U.S. Bishops, believed that a chapel to Our Lady of Guadalupe was indispensable at the National Shrine because it would serve as a “visible sign of solidarity between the people of the United States and Latin America.” Cardinal Cushing also led the petition of the U.S. Bishops during the first session of Vatican Council II, requesting that Our Lady of Guadalupe officially be designated as the Patroness of the Americas.  The altar in the chapel is that of Archbishop John Carroll, first used in 1774 at the home of his mother in Rock Creek, Maryland, during a period of anti-Catholicism in the Colonies.

The chapel is inscribed with the following prayer, requesting the intercession of the Blessed Mother under her title as the Patroness of Latin America:

As the Church honors the Blessed Virgin Mary under the title of Our Lady of Guadalupe, the Patroness of the Americas, we invite you to present your intentions, both great and small, to Our Lady by lighting a candle today at the National Shrine.