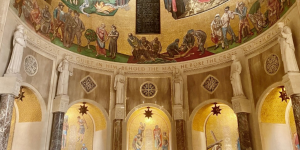 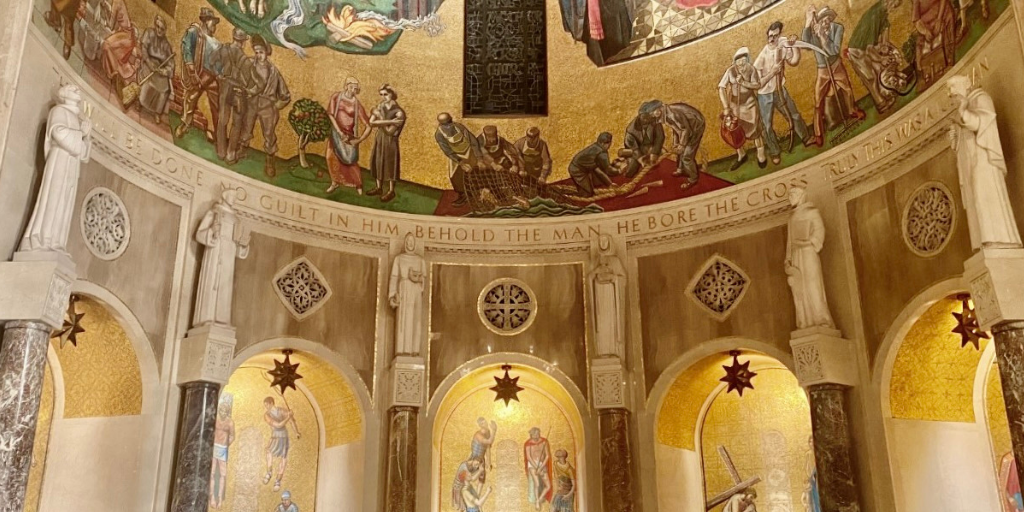 Did you know that the Franciscans are one of the largest religious orders in the Catholic Church, with approximately 30,000 members across the world? The Basilica honors the lives and legacies of some of the most instrumental members of the Franciscan Order with breathtaking Trani marble statues in the East Apse. Today, we take a deeper look at these faithful followers of Christ, who dedicated their lives to caring for others. 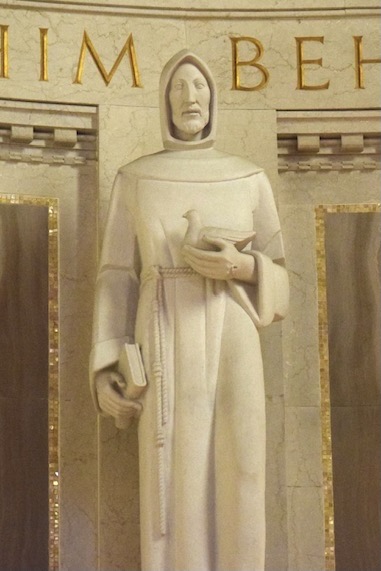 The son of an affluent cloth merchant, St. Francis of Assisi lived in wealth and ease until God used a meeting with a leper to change his heart. After the incident, St. Francis turned his life toward God, and one day, while praying in a tiny dilapidated chapel, he heard a voice say to him, “Francis, repair my church.” While he initially interpreted the command literally, he soon realized that it reached beyond the physical church. He decided to reject his wealth and pursue a simple life, performing manual labor and ministering to the sick.

St. Francis initially faced ridicule in his community, but he was eventually joined by others and formed the Order of the Friars Minor (which was later recognized as part of the Franciscan Order). Their practices included living in poverty, demonstrating love for nature, animals, and their fellow human beings, and drawing close to Jesus in their suffering. The order was officially recognized by the pope in 1210.

Though St. Francis was plagued by difficulties later in his life, including two failed pilgrimages to the Holy Land and the loss of his eyesight, he did not lose his positive outlook. He continued to find joy and peace in prayer and God’s creation. Today he is recognized as one of the Catholic Church’s most venerated and beloved saints, and is portrayed in the Basilica in a Trani marble statue created by Jean de Marco. 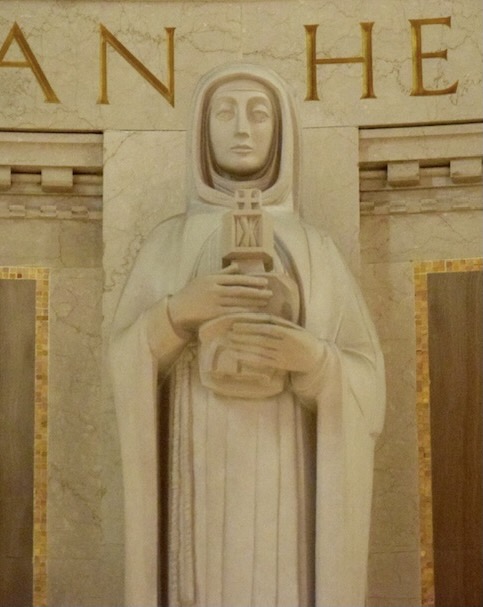 Born into a wealthy aristocratic family, St. Clare enjoyed all the comforts her parents provided her, and had little knowledge of what it meant to live in poverty. However, at the age of seventeen, she heard a sermon by St. Francis of Assisi which led her to become a nun. Under Francis’ guidance, in 1212, Clare forsook her family’s wealth and social standing to join a convent.

Despite her parents’ attempts to forcibly remove her from her new life – even sending a group of a dozen armed guards to retrieve her – Clare remained ever-vigilant in her faith and fled to a different convent. She later founded her own order, which came to be known as the Poor Clares. Her example had such a profound impact upon her mother and sister Agnes that they also joined her in holy service and became members of the Poor Clares.

In the Order of the Poor Clares, Saint Clare and her followers lived by stringent rules – eating no meat, wearing no shoes, and hardly speaking – so as to better contemplate Christ, and be “transformed into the image of God.” Clare understood vocation as a gift from God and urged fellow believers not to underestimate its importance. Her dedication to her vocation was not in vain, as over 750 years later, the Order of the Poor Clares currently has branches in nearly 900 monasteries across five continents. 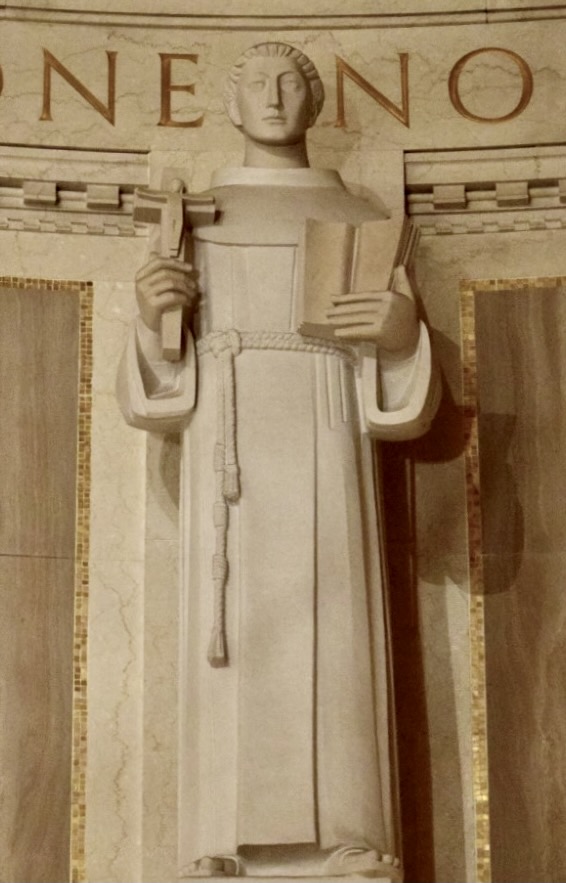 Born to members of the Portuguese nobility, St. Anthony received a robust education, studying in France and Italy. When he was 15, he joined the canons of St. Augustine, and became known as an astute thinker. However, after a group of Franciscans were martyred in Morocco, Anthony decided to join the Franciscan Order and attended the general chapter in Assisi alongside St. Francis himself. Anthony began his service in positions of obscurity, until by chance, he was asked to deliver an extemporaneous speech at an ordination ceremony for Dominicans and Franciscans. All in attendance were amazed at Anthony’s eloquent and engaging preaching, including St. Francis, who immediately granted him permission to begin teaching others in an official capacity.

With St. Francis’ blessing, Anthony started a highly effective preaching mission, often speaking in outdoor settings, without using notes. His persuasive style convinced many people to turn away from their sin, to forgive their enemies, and live more pious lives. His mission first took him to Italy, and then to France, where he later developed dropsy. Anthony passed away in a Poor Clare convent at the young age of 36, while on his way home to Padua. 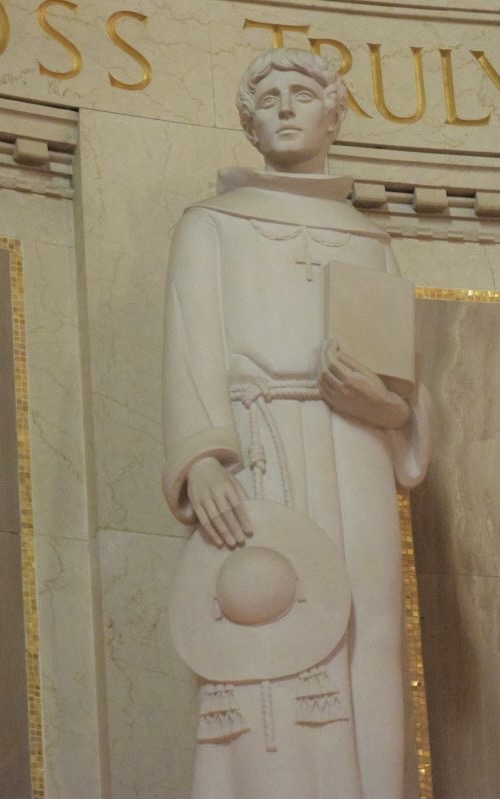 Born as Giovanni di Fidanza in the early 13th century, St. Bonaventure is said to have received the name “Bonaventure” due to an incident with St. Francis of Assisi. Legend holds that when he was just a boy, he became gravely ill and was miraculously healed by St. Francis. Upon healing him, St. Francis remarked “buona ventura” (good fortune) – inspiring the name by which he is known today.

After studying theology and philosophy at the University of Paris, at the age of 20, Bonaventure joined the Franciscan Order and quickly ascended to a leadership position. Unfortunately, following Francis’ death, the members of the order fell into disunity and dissension, splitting into two main factions: the “Spirituals,” who favored strict, austere standards of living; and the Relaxists, who were more casual and favored less severe asceticism. Thanks to Bonaventure, both factions were able to unite under a moderate approach, a feat which earned him the designation as the “second founder” of the Franciscans.

Rather than being caught up in accomplishing “great” things for God, Bonaventure sought to glorify God in the faithful achievement of the ordinary. He lived by the motto: “Do common things well and be constantly faithful to small matters.” His dedication to faithfulness in the “small things” did not prevent him from leaving a profound mark on Christian thought and philosophy. Over the course of his lifetime, he penned countless essays, over 500 sermons, and a biography of St. Francis. He passed away at the Council of Lyons, which accomplished the unification of the eastern and western Churches – in keeping with the spirit of Bonaventure’s gift of conflict resolution. 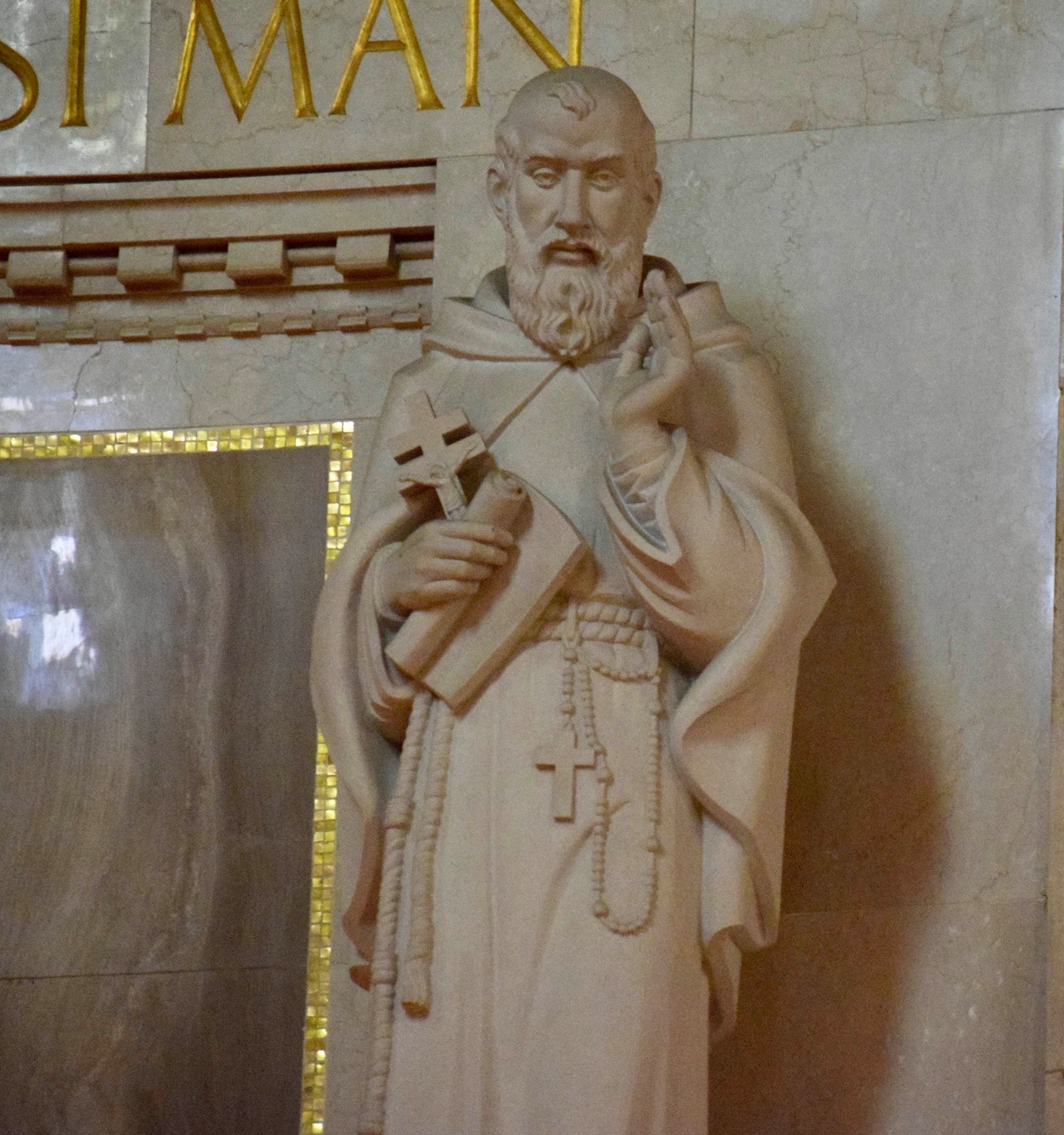 Lawrence of Brindisi was born as Julius Caesar Russo in Brindisi, Italy in 1559. When he was just seven years old, his father passed away, and his mother sent him to live with the Friars Minor Conventual. A few years later, they moved to Venice, where he eventually attended the College of St. Mark. An exceptionally bright student, he continued his studies at the University of Padua, learning various modern and ancient languages with ease. Upon joining the Capuchin Order in 1575, he took the name Lawrence, and in 1582 he was ordained in Venice and began to preach.

His knack for languages inspired him to pursue further linguistic study, and he examined the Scriptures in their original text, gleaning new observations. He became well-versed in rabbinic texts and was so fluent in Hebrew that he could preach to Italy’s Jewish communities. An acclaimed Mariologist, he wrote extensively about Mary in a series of sermons called “Mariale.”

Lawrence was also a man of impressive strategic acumen; during his tenure as a chaplain for the imperial army, he offered tactical suggestions which resulted in tremendous military successes. In 1619, Lawrence passed away while on a diplomatic mission to Spain, after becoming gravely ill in Lisbon. He had traveled to speak with King Philip III on behalf of Neapolitans facing oppression from local authorities. He was canonized in 1881 and is portrayed in a Trani marble statue made by Cascieri & di Biccari. 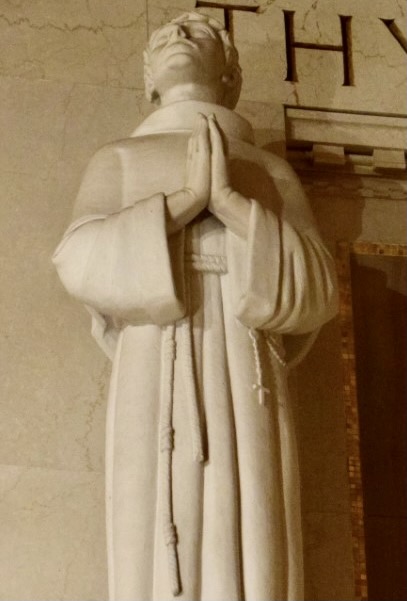 Born in a small Italian garden shed in 1602, St. Joseph of Cupertino was a simple child who was somewhat of an outcast. Few of the children in his community associated with him because he frequently went around with his mouth open, which earned him the nickname “the Gaper.”

As he grew, Joseph worked as a kitchen servant and then as a stable hand for members of the Capuchin community, a branch of the Franciscan Order, before training to become a priest. In 1628, Joseph received his ordination and began his ministry, performing many healings and other miracles. According to legend, he was seen levitating on over 70 different occasions, which led to the development of a new nickname: “the Flying Friar.” Despite his extraordinary abilities, Joseph continued to live in humility. However, some of the religious leaders at the time were unsettled by Joseph’s actions and wanted to keep him out of the public eye, so they agreed to send him on missions to secluded places for the remainder of his life. In 1663, he passed away in a place of complete solitude.

You can explore the statues of the Franciscan saints virtually below!

Remarks Given in St. Peter’s Square on March 23, 2011, Benedict XVI. Accessed via the Vatican.